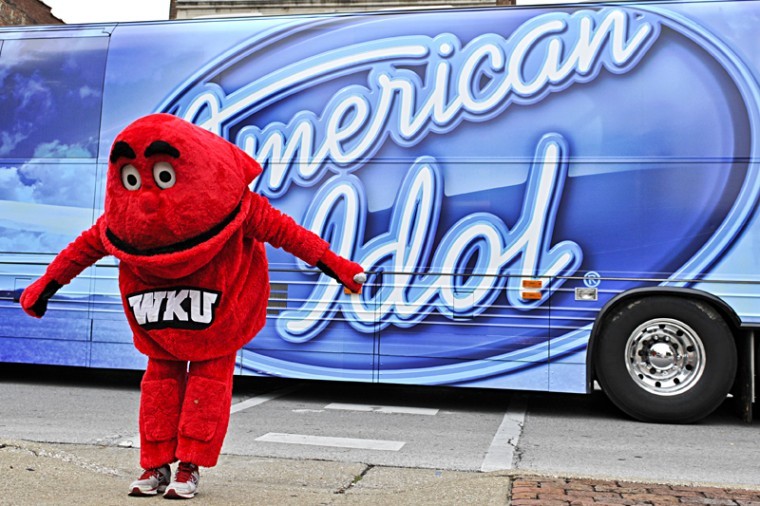 Despite the overcast sky and the earliness of the hour, hundreds of 15 to 28 year olds whooped and clapped for the American Idol bus as it drove slowly through the street, ready for their chance at stardom.

Among those eager to audition for the television show were several WKU students.

“I always watched the show, and I thought it would be fun,” said Isaac Middleton, 20, from Harlan.

Middleton, a music major, said he was walking downtown the night before when he saw a sign advertising the auditions and thought he’d give it a shot.

He arrived the next morning, with a guitar in tow, ready to sing Johnny Cash’s “Folsom Prison Blues.”

This was Middleton’s first audition for the show, and he said it was probably going to be his last.

For others, like 20-year-old Mariah Hutcherson, the auditions in Bowling Green offered her a second chance to go through the audition process.

After almost trying out in 2008 in Louisville, the Elizabethtown senior said she’d never do it again – that is, until this opportunity arose in Bowling Green.

“I think Bowling Green is a good location, being between Nashville and Louisville,” Hutcherson said.

Producers of American Idol had the same idea. In a press conference in the square on Friday morning, they said this particular bus tour was to scout out talented people who may not have been able to audition otherwise.

Katie Fennelly, one of the producers, said they were looking into the “nooks and crannies” of the country.

One of those who hoped to show the judges something different was 18-year-old Chelsea Wallace from Bowling Green. Although she’s about to start her freshman year at WKU as a Spanish major, Wallace still wanted to audition.

“I’ve been singing probably since I was four – as long as I can remember,” she said.

Wallace said she was a little anxious about singing in front of the judges, but she wasn’t too concerned.

“I just go for it, no worries,” she said. Though she said practicing did help deal with the nerves.

Carter said singing is his hobby and that he is passionate about it. He hoped this enthusiasm would set him apart from other contestants.

Like Carter, Hutcherson said she loved singing in front of people.