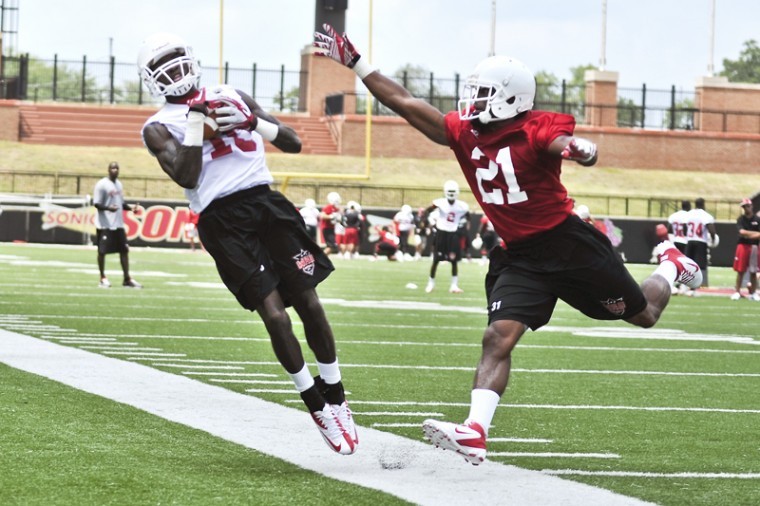 Sophomore wide receiver Willie McNeal, left, catches the pass going out of bounds against junior defensive back Arius Wright during WKU’s first practice.  WKU has been preparing since the first day of practice for Austin Peay on Saturday, Sept. 1.

Jamarcus Allen knows better than to look past a Football Championship Subdivision opponent.

Even with a game against defending national champion Alabama looming a week away, the senior defensive tackle and team captain has watched the Toppers drop their last two games against FCS teams. He knows an opponent like Austin Peay is capable of an upset.

“They put on their shoulder pads just like we put on ours,” he said. “Anybody is capable of beating anybody. We’re just going to go out there and play our best and come out on top.”

Allen and the Toppers will take the field at Smith Stadium at 6 p.m. on Saturday as they open the season against Austin Peay.

The Toppers are 0-2 in their last two games against schools from the lower-revenue FCS, including a 44-16 home beating by Indiana State last season.

Coach Willie Taggart said he hasn’t even mentioned that game to his team this year.

“I don’t think I have to,” he said. “I think our guys understand. We’re going to talk about Austin Peay and plan for Austin Peay.”

The start of the season hasn’t been friendly to the Toppers in recent years, either. WKU hasn’t won a season-opener since 2005, when it was still an FCS program, itself.

Taggart said a good start to the season will help to keep the Toppers from being overlooked if they’re bowl-eligible at the end of the season.

Last season WKU went 7-5 but was shut out of the bowl process. The September loss to Indiana State likely cost the Toppers some leverage in the bowl selection process.

“It’s important that we come out and take care of our business and create a national identity and you can’t do it if you don’t start off right,” Taggart said. “Our guys understand that.”

Taggart has been stressing to his team the importance of starting off the season with a win, senior quarterback Kawaun Jakes said.

“Coach T said start fast. That being our first game, that’s what we’re going to do,” Jakes said. “Our goal is to win the Sun Belt Championship and we just need to go out, play hard and play together.”

WKU made the jump out of the FCS to the higher-revenue Football Bowl Subdivision in 2008, but has a rivalry with Austin Peay dating back to the schools’ days as rivals in the FCS’ Ohio Valley Conference.

Many prominent players from last season’s WKU team return to the team this year including Jakes, who has been the Toppers’ starting signal-caller since early in 2009.

The WKU defense brings back junior linebacker Andrew Jackson, who led the team in tackles last season but must make up for the loss of senior defensive lineman Quanterus Smith, last season’s sack leader, for a game.

Smith will serve a one-game suspension on Saturday for an undisclosed violation of team rules.

Much of the spotlight will also be on junior Keshawn Simpson, who will start at running back for WKU against Austin Peay, replacing the graduated Bobby Rainey. Simpson figures to share carries with junior Antonio Andrews and freshman Leon Allen as well.

After a 7-5 season the expectations may be raised for the Toppers this year, but right now they have one goal, Jakes said — beat Austin Peay.

“We’re not overlooking anyone,” he said. “It’s the first game on our schedule, our guys are ready to play right now and we can’t wait for Saturday.”