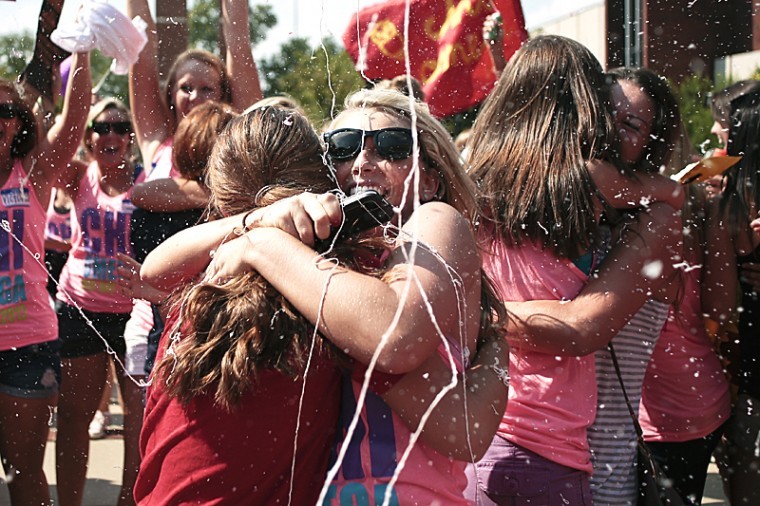 Sisters from each sorority lined up chanting in the Mass Media and Technology Auditorium on Sunday.

These women, known as “Pi Chis” to disguise affiliation with any sorority — who led the 434 recruits around during recruitment week — shouted the chants of all eight social sororities that participated as a way to end the week.

Recruits had been handed bid cards by Pi Chis earlier in the day before signing with a sorority.

The new members were gathered in Mass Media to celebrate and meet the rest of their new sorority sisters.

The ceremony began with an opening statement by Paige Pardue, Panhellenic Association recruitment chair, wishing the new pledges well with their sorority.

“I’m so happy you all have found your place,” Pardue said.

The pledges spent time taking pictures with other new members, many holding up sorority signs with their fingers. Some of the girls embraced each other, excited about being chosen for the same sorority.

Hopkinsville sophomore Jennifer Hanks, a new member of Chi Omega, said she just transferred to WKU from another school.

“My favorite part of rush week has been getting my bid card and making new friends,” Hanks said.

Even with the addition of AXiD, Mansfield said all eight social sororities met their quota for members.

Louisville senior Amanda Heim, a member of Alpha Delta Pi, was a Pi Chi during recruitment.

“I loved being able to meet and become friends with girls in other sororities,” Heim said.

“Sorority rush week gave me a way to meet new people and step outside of my comfort zone,” Guelda said.