Seeing is believing — Jakes once again at the helm of WKU 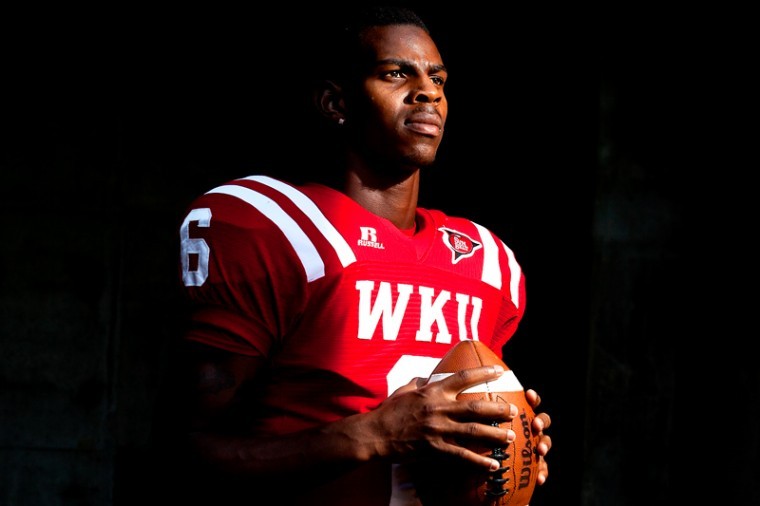 Kawaun Jakes has seen it all in his four years on The Hill.

The fifth-year senior has been WKU’s starting quarterback for the better part of the last three years after redshirting in 2008 and he’s seen the right and wrong ways to play under center.

“Playing this position, you’ve always got to be a leader,” Jakes said. “People look at you to lead by example, do things right, and that’s just what I’ve got to do every day.”

With running back Bobby Rainey gone to the National Football League, Jakes is arguably the most well-known player returning to the Topper offense this season.

Jakes saw his first action during his freshman season against Navy in 2009, when he came off the bench to throw for 75 yards while rushing for 28 more. He was named full-time starter the next week.

Jakes has led the offense through thick and thin during his time as quarterback in the years since then. He redshirted through WKU’s last season of transition to the Football Bowl Subdivision then took the helm during one of the least successful periods in school history.

The quarterback got his first start for the Toppers on Oct. 10, 2009, a home loss to Florida International, but didn’t get his first win until Oct 23, 2010, a road win over Louisiana-Lafayette.

Realistically, one person can’t be responsible for the 14 straight losses in that time, but while the entire program struggled to catch up to other FBS schools, Jakes was a lightning rod for criticism of the team from fans and others.

The Toppers opened the 2011 0-4, with Jakes being benched in the second half of a loss to Navy and then coming off the bench in the next game, against Indiana State.

He earned his starting spot back when his replacement, redshirt freshman Brandon Doughty, tore his anterior cruciate ligament in the third offensive play of the game.

Despite the criticism, he said he never paid attention to any negative press.

His luck was about to change, though. Jakes lost his first game back as starting quarterback before ripping off seven wins in eight games to finish the year 7-5.

Jakes has put up notable statistics in his time as starting quarterback, throwing for 5,050 yards and 29 touchdowns in his three seasons in Bowling Green.

He didn’t get the chance to win an eighth game last year — WKU didn’t get a bowl bid — but coach Willie Taggart thinks Jakes has what it takes to lead the Toppers to the postseason this season.

“You can tell by the way our offense has gone during training camp,” the coach said. “It’s been a lot more efficient than it’s been in the past, and I credit a lot of that to Kawaun and getting the guys out and really forcing his teammates to work.

“He’s putting in the time to learn the offense and get it down and it’s making us that much better, and with that progress we expect big things from him.”

Jakes has two goals for the season — win the Sun Belt Championship and win a bowl game for the first time in WKU’s FBS history — and he thinks now that the team is in its third year under Taggart, they can do it.

“Being in our third season, we’re more in tune with what we’ve got to do,” he said. “People are where they need to be on plays where routes are run, reading coverages and things like that. We’re all more focused.”

Taggart said he thinks Jakes has what it takes to lead the Toppers to the postseason in his fifth and final year at WKU.

“There’s no other chance for him now,” he said. “It’s the last one for him and he wants to go out on a bang. I want him to too and hopefully everyone appreciates the things he does for us.”