Z is for Zipliner: Students work as ziplining instructors 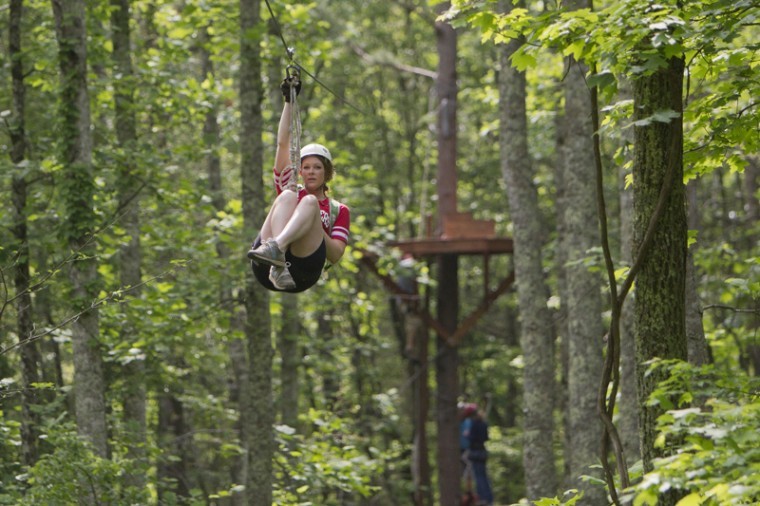 Zipping through treetops is more than just a past time for birds — it’s something anyone can do, especially when you live so close to Cave City, Ky.

Bowling Green senior Taylor Garabato worked for Mammoth Cave Adventures, one of the two locations where zip-lining is available in Cave City, as a zipline tour guide during the summer of 2010.

“It’s pretty controlled — it’s not quite skydiving, but it’s some fun,” he said.

The “pre-professional” will graduate this spring with a major in recreation administration and will have completed the outdoor leadership program (OLP). He said the correct term for zip-lining is actually “zipping.”

“That would be what the professionals call it,” Garabato said.

He explains zip-lining to be an activity consisting of a trolley, a harness and gravity.

“You hook yourself up onto a zip trolley and a harness, and you have a three-quarter-inch, stainless-steel cable that usually moves downhill, but it should have an upward curve to it to break some of your speed,” Garabato said. “You just use a trolley, hook onto that cable and let gravity sort of take you away.”

Louisville freshman Ashley Lethco got her first taste of zipping at summer camp when she was in the third grade.

According to ziplinerider.com, Cave City is home to the longest twin zipline in the state of Kentucky, which can be found at Kentucky Action Park.

“Mammoth Cave Adventures has five zip lines and one sky bridge, offering a fun and safe trip for the whole family and great outdoor activity for kids, families, corporate groups and adventure seekers,” according to ziplinerider.com.

Through his work within his major at WKU was when Garabato got his first chance to actually zipline.

“There is a recreation class — Rec. 439 I think is what it’s called — and that’s a challenge course facilitation class,” he said. “One of the first times I had done zip-lining was through that class.”

It was after taking this class that Garabato started his work with Mammoth Cave Adventures.

It was after talking with Bull that Garabato realized through his work in his recreation class, he had the appropriate certifications to work as a zipline tour guide.

“What interests me most about zip-lining isn’t necessarily about me having fun, but it’s about sharing that experience with other people,” he said. “It’s about showing them, ‘Hey, you can do this thing that puts you outside of your comfort zone, and you might learn something about yourself.’”

Mt. Washington freshman Ryne McMullen agrees it is something that puts you outside of your comfort zone.