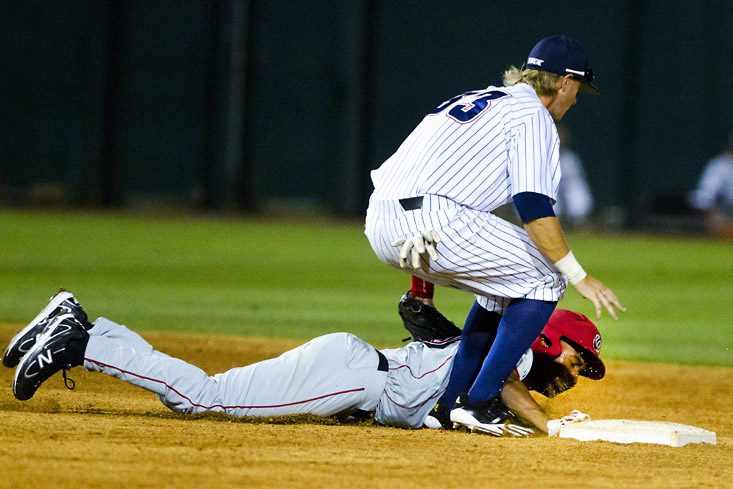 Outfielder, David Simmons, lies on the ground after sliding into second base and being tagged by outfielder, Mark Nelson, from Florida Atlantic University. The Hilltoppers lost 4-3 to FAU.

No. 8 seed WKU had battled and kept close with No. 1 seed Florida Atlantic all game Wednesday night in its Sun Belt Conference Tournament opener.

The Toppers tied the game at 3-3 in the top of the seventh inning and looked to have gained the momentum.

Junior right-hander Taylor Haydel came back on to pitch the ninth inning, having already thrown 3 1/3 innings of solid relief.

But Haydel issued a lead-off walk to FAU left fielder Nathan Pittman and gave up a single to second baseman Mike Albaladejo.

With runners on first and second base and no outs, Haydel decided to keep a close eye on the base runners.

But when Haydel turned to release a pickoff throw to first base, junior first baseman Ryan Huck was playing in and wasn’t covering the bag.

Haydel’s throw went into the ground, past Huck and into shallow right field.

Pittman came all the way around from second base to score on the errant throw and gave the Owls a 4-3 victory.

“Awful way to end the game,” coach Matt Myers said. “Very unintelligent baseball. We shouldn’t pick in that situation. Unfortunately it cost us a game in which we were playing great.

“I’ve never seen a game end like that. I don’t know what to say.”

Singles by senior center fielder Jared Andreoli and sophomore shortstop Scott Wilcox put runners on the corners for WKU with just one out in the top of the first inning.

FAU got to Clay in the third inning with three runs to take the lead.

Pittman and Albaladejo led off the bottom of the third inning with back-to-back singles to put runners on first and second base with no outs for the Owls.

However with two outs, third baseman Kyle Newton hit a two-RBI double and first baseman Mark Nelson picked up an RBI single to gain a 3-2 advantage over WKU.

Meanwhile, after giving up two runs in the first inning, Garton settled down to put zeros on the scoreboard over the next five frames.

But WKU would have another opportunity against Garton in the top of the seventh inning.

The Toppers loaded the bases with just one out but could manage to plate just one run, coming on a sacrifice fly by Wilcox.

However, the lone run was enough to tie FAU at 3-3.

The Owls seemed set to regain the lead in the bottom of the seventh inning when Albaladejo tripled with only one out.

But Haydel escaped the jam by striking out two batters and kept the game tied.

FAU once again got a runner to third base in the bottom of the eighth inning and this time with no outs.

Once again, Haydel maneuvered his way through the inning and stranded the base runner.

But in the bottom of the ninth inning FAU took advantage of Haydel’s error and secured the victory.

FAU moved to 1-0 in pool play and WKU fell to 0-1 with the loss. The Owls are now tied with Louisiana-Monroe for the lead in pool A while the Toppers are tied with South Alabama.

WKU needs to win out and have the Owls lose both of their last games in order for the Toppers to have a chance to move on.

WKU will be back in action Thursday night at 7 p.m. against South Alabama.