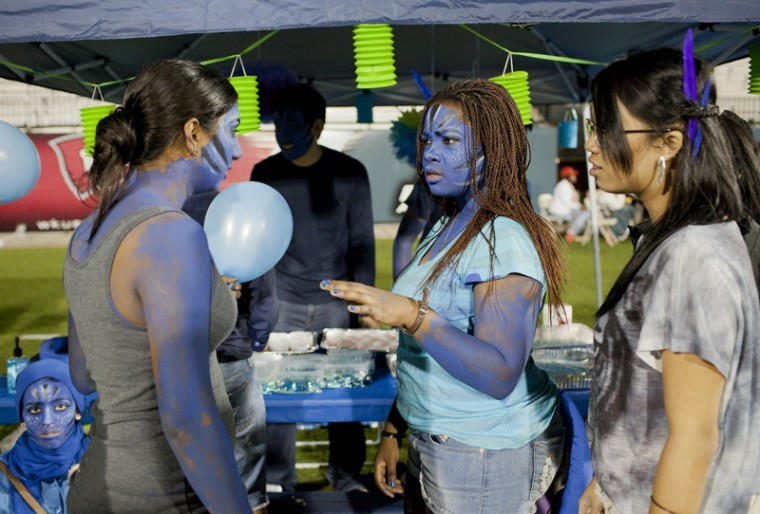 Kalizya Nseluka a freshmen nursing major from Lusaka, Zambia, participated in Relay for life with "Team Global Domination," which dressed as characters from the movie Avatar. Nseluka's team was made up mostly of international students who participated on behalf of their student coordinator, Jackie Bretz, who overcame cancer.

Friday night marked the seventh Relay for Life event for Denise Mozal and her first on a college campus.

Mozal, a resident of Chesterfield, Mich., was diagnosed with breast cancer in 2009.

Seeing others dealing with cancer when she went to her first Relay had a big effect on her, Mozal said.

“I saw little ones, like two and a half years old, walking around, and I thought, ‘This is crazy — this is not how it should be,’” she said.

She decided then to walk a Relay in every state, to start a blog for others to share their cancer stories and to encourage people to become their own cancer advocates.

Mozal said she hopes her blog encourages people to get screened for cancer to catch it early.

Relay for Life is an overnight event hosted across the county by the American Cancer Society. Teams set up around the perimeter of the event, with at least one person from a team walking around the track at all times to represent the idea that “cancer never sleeps,” according to the organization website.

Angie Geron, the community representative for the American Cancer Society, said at the end of the night that more than $20,000 was raised. She said she was very happy with how the event ran.

Colby Osborne, chair of WKU’s Relay for Life Committee, said early in the night that the event was a “huge success” in his book.

Osborne said he thought the event was larger than last year’s Relay because of word of mouth.

“Most people don’t want to turn you down for an awesome cause like finding a cure for cancer,” Osborne said.

Bedford junior Amanda Combs, a resident assistant in Poland Hall, was able to convince the people in her dorm to set up their own Relay team for the first time.

Combs said getting her bosses to participate in Relay was easy.

“It’s also big in their hometowns, so they were all about it, and they were surprised that residence halls, other ones, don’t participate in it.” Combs said.

Omega Psi Phi fraternity, a member of the National Pan-Hellenic Council, also set up a tent for Relay for the first time.

Jarren Nixon, president of the Omegas, said participating in events like Relay is out of the ordinary for an NPHC organization.

“Normally you don’t see anyone from NPHC come out here,” Nixon said. “So we thought it would be a great idea for us to kind of step outside of our element and do something for a great cause.”

Nixon said members of his fraternity were walking in memory of Tabitha Briggs, a former member of WKU’s Delta Sigma Theta sorority, who died of breast cancer at age 24.

“Cancer is something that everybody from every nationality, race, culture is touched by,” Nixon said. “And this event kind of brings us all together, reminds us all why we’re here.”

Alpha Xi Delta sorority also made its first appearance at this year’s Relay.

Owensboro sophomore Olivia Hardesty, an Alpha Xi, said her sorority understands that an event like Relay isn’t just for raising money for cancer.

“Of course everyone needs money, but that’s not what it’s about,” Hardesty said. “It’s about how people treat you — all the support, all of the prayers.

“Activities like this that are uplifting and promote a positive outlook on cancer.”

Hardesty’s father is a colon cancer survivor. She said next year she hopes to be more involved by working on the committee for the event.