AXiD concludes first year back on the Hill 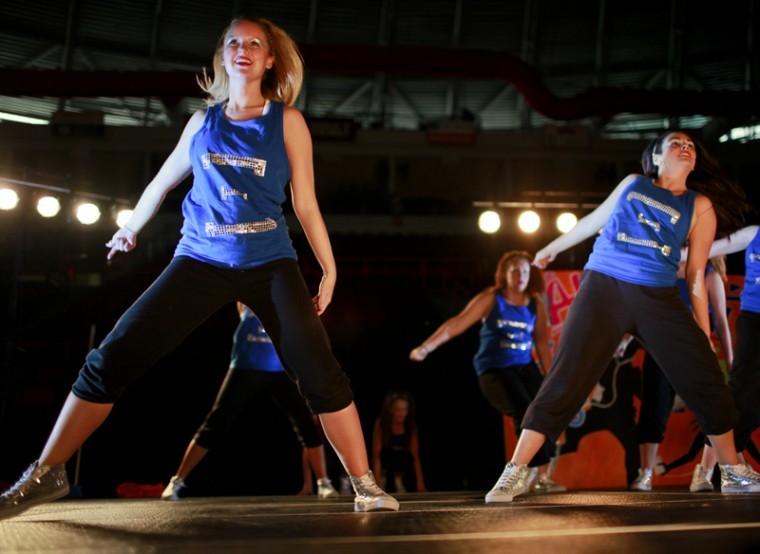 Alpha Xi Delta sorority performs at Spring Sing in Diddle Arena on Sunday, April 15. The chapter was originally installed at WKU in 1967 but disbanded in 1993, reemerging this year.

Even though Toronto freshman Kristian Shumate is far from home, she’s found a second family at WKU.

The sisters of Alpha Xi Delta sorority supported her this year when her real family couldn’t, Shumate said.

“If I was having a bad day, I always had a sister I could go to talk to about it,” she said.

Shumate and the other 58 women of AXiD are the founding mothers of the newly formed colony.

AXiD was reinstalled this school year, and the colony members were initiated on Jan. 29, said Tori Henry, AXiD president and Mount Washington junior. The chapter was originally installed at WKU in 1967 but disbanded in 1993, according to AXiD’s website.

Henry dropped out of formal recruitment in the fall after meeting with women from the AXiD chapter at Indiana University.

“I immediately fell in love with those girls,” she said. “They were just the nicest girls, and they were kind of exactly like me.”

Shumate, who is the AXiD historian and intramural chair, said the goals of AXiD and what they were trying to accomplish on campus appealed to her.

The sorority has jumped into Greek life this year, participating in most Greek events.

The women went through their first homecoming and Greek Week, and also participated in several pageants.

“You got to see how awesome other chapters were, how their brotherhood or sisterhood was, and then you got to see how ours was just as strong as that, even though we are the newest sorority on campus,” Henry said of Greek Week.

AXiD has also been working toward promoting its philanthropy, Autism Speaks, which has been AXiD’s national philanthropy since 2009.

“There is a high concentration of children with autism in Bowling Green,” Henry said. “Right now, not a lot of people know that, especially on Western’s campus.”

April was National Autism Awareness Month, and throughout the month, AXiD stood at tables in Downing University Center educating students about autism.

The sorority had their first philanthropy event on Sunday, a barbecue at Centennial Mall.

The sorority raised $800 at the barbecue and is still accepting donations for Autism Speaks.

Henry believes the way the sorority recruited women this year allowed them to initiate a very diverse group.

Alyssa Mansfield, the Greek affairs coordinator, said some women were going through formal recruitment but couldn’t find the right organization to join, but AXiD became that group.

“Alpha Xi Delta sort of bridged that gap for us and gave an opportunity for more women to join a sorority,” she said.

AXiD will participate in its first formal recruitment in the fall, welcoming in a new class of women.

“I think that’s truly going to integrate us into the Greek system,” Henry said.