Aramark likely to stay through 2017 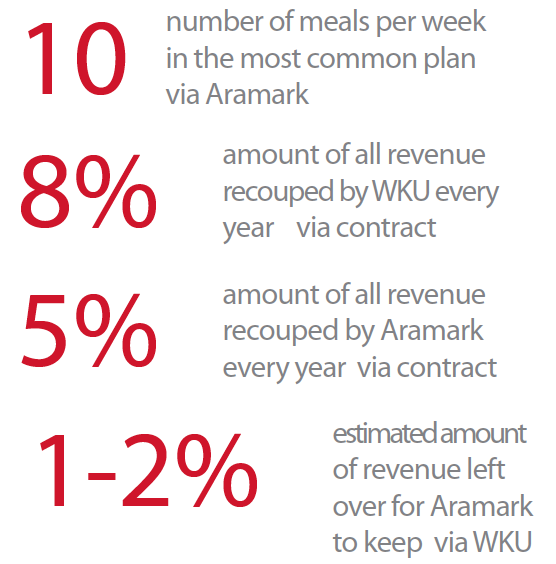 WKU and food service provider Aramark plan to extend their partnership through 2017. Gary Meszaros, WKU assistant vice president for auxiliary services, said the sides are negotiating a contract extension which would begin July 1. Meszaros said he hopes a deal is reached by the end of May.

Aramark’s tenure at WKU began in 1997, and both the variety of dining options and revenue have increased steadily since then, according to both parties. From 1997 to 2012, the yearly sales volume has increased by nearly $14 million. Dining venues like Izzi’s Express and Da Vinci’s are two of the newest campus eateries.

Meszaros and Tim Colley, district manager for Aramark and the WKU Restaurant & Catering Group, stressed the need for customers to understand the purpose of meal plans. Meal swipes are meant to be used at the residential, all-you-can-eat facility, they explained.

Not only are swipes designed to be used at the Fresh Food Company, but customers lose value if they use the value meal exchange. Such a transaction occurs when meal plan users go to, for example, Chick-fil-A and use swipes for value meals, which include an entrée, side and beverage. Fresh Food is the only all-you-can-eat facility, and the cash value of a meal is highest there. Swiping a value meal anywhere will show up as $3.45 on the register. But a customer paying cash for any meal will pay the most at Fresh Food, where a meal costs $7.99.

“It’s not a black-and-white issue, because you may be ahead when you eat at Fresh Food but may be behind when you start to measure up what the cost is at some of the national brands. The swipes do not represent a dollar-for-dollar purchase,” Colley said.

Meszaros said most companies with the equivalency option are doing away with it, and Aramark wants to follow suit. Colley stopped short of saying that but did say it’s not the best use of a swipe.

Both parties stressed that they feel the options for customers are some of the best in the country. Colley said the campuses that have value meal exchange options often allow it once a day and sometimes not at national brands because businesses want to maximize profit during peak times and/or at popular restaurants. For example, an exchange might not be allowed at Red Zone because there are customers willing to pay full menu price. At WKU, the exchange can be made any day, anywhere, except Einstein Bros. Bagels.

“That’s why I say the students here have a lot more options,” Colley said. “A lot of students don’t appreciate how expansive their program is.”

One of the most recent changes to every meal plan was the addition of meal plan dollars. Each plan comes with a declining balance separate from weekly meal swipes. They can be used at every dining location on campus, as well as the on-campus convenience stores.

There’s an 11 percent discount with meal plan dollars, and there aren’t restrictions on them. They roll over from the fall to spring semester.

As recently as last spring, meal plan users could decide whether to buy meal plan dollars. That choice no longer exists. Meszaros described the current format as a selling point and teaching tool, because participants will get used to using their declining balance like a debit or credit card, he said.

A benefit of having the unrestricted money is getting a better value on snack food. Students often use meal plan exchanges to buy non-value meal items. In that case, a swipe can be used to purchase $3.45 in goods. In the Downing University Center, the combination of a 20 oz. Powerade and 1.74 oz. bag of M&M’s will maximize that swipe. Colley said he’s not aware of another account with an equivalency program.

Adding it all up

The actual cost per meal on a meal plan isn’t $3.45. Based on a 14-meals-per-week plan, 230 meals are available this semester, meaning meals cost $5.12, which shows why eating at Fresh Food is the best value. The number of days Aramark is open for business is determined by the university calendar. When dorms are open, Aramark’s running. Kit Tolbert, director of housing operations at WKU, said there are 115 boarding days in each semester.

Meal plan participants must also account for restrictions. For example, users on set meals-per-week plans can’t swipe more than four meals in a day, and meals don’t roll over from week to week.

Heath said the restrictions are a “hassle” and often cause him to “burn” swipes on drinks.

“I think it’s dumb that you can only use four a day,” he said. “I know they make money other places. Students are getting hosed as it is with tuition going up, and up and up.”

Meszaros said the meals-per-day rule is in effect because parents and students asked for it years ago.

“We’re still being the mother, and that’s an issue that goes above my head,” he said. “That’s the university taking care of the students.”

Colley said it’s impossible to meet every individual’s needs when dealing with such a large number of customers. About 6,000 students — including roughly 2,000 first-year freshmen required by WKU policy to be on at least a 10-meal per week plan — are on meal plans. Many WKU employees are as well, but Colley couldn’t provide a number.

Prices are set based on several things like food and labor costs, but maybe the most significant aspect is usage — percentage of swipes redeemed.

Colley said usage at WKU stays around 86-88 percent, which is higher than any other scenario in which he’s worked. Part of the reason for that is the presence of the meal plan exchange, he said.

Some people — if not most — do everything in their power to use every swipe on their card, but if that percentage jumps, everybody will feel an impact.

That being said, there’s an alternative for commuting students and university employees. Block plans come with a set number of meal swipes and are free of daily usage restrictions. The swipes are packaged by semesters, not weeks. Unused swipes from the fall semester roll over to spring. No on-campus residents can buy these plans.

Food service at WKU will generate an estimated $18 million in 2012. The university receives 8 percent of all yearly revenue, plus $400,000 for renovations — an amount WKU matches, Meszaros said — and roughly $250,000 for repairs. Meszaros said every penny recouped by WKU is reinvested into food services, whether that’s adding restaurants, improving dining environments or paying bills.

“Nobody’s putting that money in their pocket and saying, ‘Oh, good, we’ve got all this extra money — we’re going to put it toward buying new buses,’” he said. “Food money stays in food.”

Meszaros said some of the money will go toward the DUC renovations to recruit students and keep them at WKU.

“In fact, part of our goal in this new contract is to keep more of the money on campus, because it’s helping (Aramark), too, because it’s reinvested in the program, and that’s going to be easier for them to sell meal plans and be successful in the long run.”

Five percent of profits go to Aramark, Meszaros said, to help pay its corporate overhead. He said he’d guess an additional 1-2 percent is left over for Aramark to keep. Industry profit average is 6-8 percent, he said. Colley declined to answer any questions related to profit.

“I’m not going to get into all the contractual things,” he said. “Aramark is the contracted food service provider, and it is a for-profit company, so yes, there is some profit that goes to Aramark.”