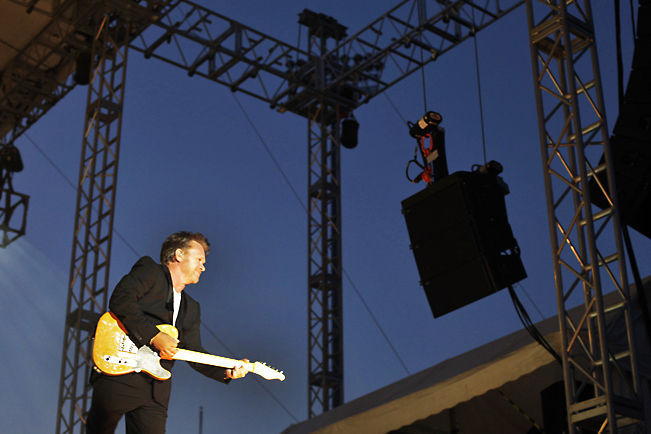 “He’s a classic, and he don’t take no shit,” said 46-year-old William Hunley, of Hiseville.

The concert opened around 6 p.m. with the Court Yard Hounds, a band consisting of two of the members of the Dixie Chicks. The beer was cold and flowing as the audience filled the stadium with excitement.

It was Hunley’s fourth Mellencamp concert. Hunley said he felt a connection with Mellencamp through songs that reminded him of his earlier years, especially the 1982 hit song, “Jack and Diane.”

“I had a girlfriend I thought I was in love with in the mid-80s,” Hunley said. “I’ve never been married since. Tonight, I expect relaxation, peace and enjoyment.”

Inducted to the Rock and Roll Hall of Fame, with more than 40 million albums sold along with more than 20 albums and seven No. 1 hits, there was plenty of Mellencamp’s well-known rock to go around.

Born and raised in Indiana, Mellencamp is known by his fans as an all-American boy. Many of his lyrics represent these ideals and hit close to home for many fans.

“It all has to do with the heart of America,” said Sissy Fenwick, 63, of Owensboro. “It’s about the small towns. He’s never gone quote-unquote ‘Hollywood’.”

Around 8 p.m. the stage lit up and the crowd stood. Cheers, claps, hollers and whistles tore through the air. As Mellencamp emerged, the bass drum could be felt booming through your chest as the soulful violin moved some to tears.

“I just think he’s an American poet,” said Sandy Gile, 56, of Bowling Green. “Favorite song is ‘This Is Your Life.’ That came out right after a student of mine had died. It’s really special to me.”

Many fans said they started listening to Mellencamp at the beginning when he was known as “John Cougar” — “Cougar” being a name that an agent decided would stick more than “Mellencamp.”

As the night went on, the crowd grew even more fixated on the sounds of the night. During “R.O.C.K. in the U.S.A.,” Mellencamp yelled “Alright, let’s dance!” The crowd happily complied as the stands swayed.

By the time “Pink Houses” played, a pocket of people facing the right of the stage grew into a large mass of enthusiasts dancing together.

The energy was at its peak as Mellencamp and the band bid their goodbye. Mellencamp thanked the audience for a great night as the band started playing “Cherry Bomb.” The stands rolled with the thunder of stomps as “Cougar, Cougar!” could be heard chanted in unison. The crowd wanted more, but as the bright stadium lights turned on, the show was over.

Mellencamp fans enjoyed their personal memories of youth as the “Cougar” they knew brought them to this sentimental delight.

“We had a great time — we danced to every song,” said 68-year-old Jane Lash of Bowling Green. “It was fun to sing along with him. It almost brings you to tears.”