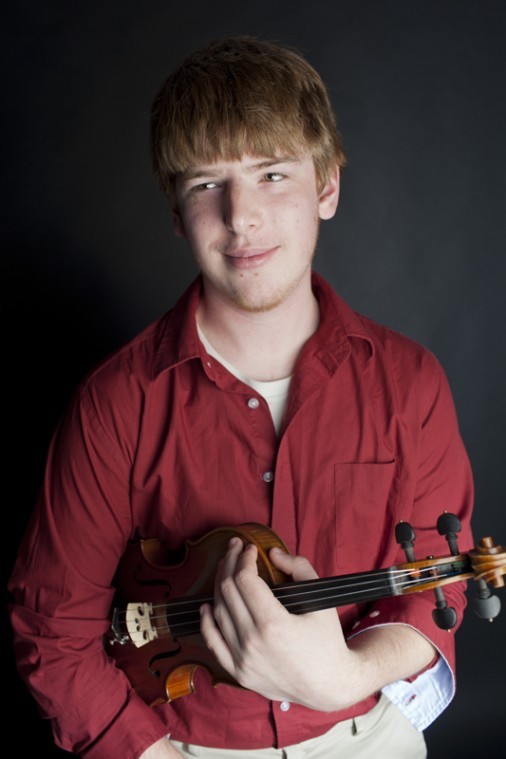 Alexandria sophomore Keith Pennington has been playing the violin since he was 8 years old. Now, 12 years later, he is a music education major and is giving lessons.

At the age of seven, Alexandria sophomore Keith Pennington saw the violin on “Mr. Rogers’ Neighborhood” and knew he wanted to play the instrument.

“I told my mom, I wanted to play that, and she questioned it,” Pennington said.

Coming from a musical family, Pennington was inspired to take lessons with Elizabeth Steva, a part-time faculty member at Northern Kentucky University. Pennington’s family has been involved in music for as long as he can remember. His father is the choral director at NKU, his mother sings in the church choir and his brother sings and plays the guitar.

Pennington studied with Steva for 10 years before coming to WKU, where he studies with Ching-yi Lin, an assistant professor of music.

“He will do things asked of him repeatedly in his lessons and tries to improve every week,” Lin said.

Pennington has now played the violin for 12 years and has recently started taking lessons on the viola.

Pennington is a music education major and plans to work as a music teacher. Lin explained that as part of his training, he observes a class that she teaches and even helps with her beginner class.

“(He) works with kids as young as four,” Lin said. “He’ll help tune the kids’ (instruments) and adjust the violins.”

Lin said he was very sweet with all the children, and she believes it is because of his approach.

“He tries to tailor to each kid’s personal needs,” Lin said. “This is a good thing, because not every student is the same.”

He also observes with Andrew Braddock, an adjunct instructor of viola.

“He observes lessons, takes notes and then later in the week, he repeats the lesson with the student,” Braddock said.

Braddock said Pennington works with two students that are both beginners and seven years old.

Braddock said he’s on track to be a music teacher.

“It’s a great career for him because of his personality,” he said.

Pennington has weekly lessons with both Braddock and Lin. Along with these lessons, he works for the music department by setting up the stage for concerts.

“He takes his job seriously,” said Bill Scott, a professor of music.

Scott said Pennington is very responsible and enjoys being at WKU.

“He’s a gentle giant with the temperament to be a leader,” Scott said.

Scott, Braddock and Lin all agree that Pennington is a receptive student.

Pennington said he spends every free moment he can working on his craft.

“I’m up here before class and between classes,” he said. “It’s like a full-time job.”

Pennington’s musical interests have also spread to the piano.

“I didn’t know how dynamic the piano can be,” he said.

Pennington’s dream is to build an orchestra from the ground up in the Kenton County School District, the same area where he went to school.