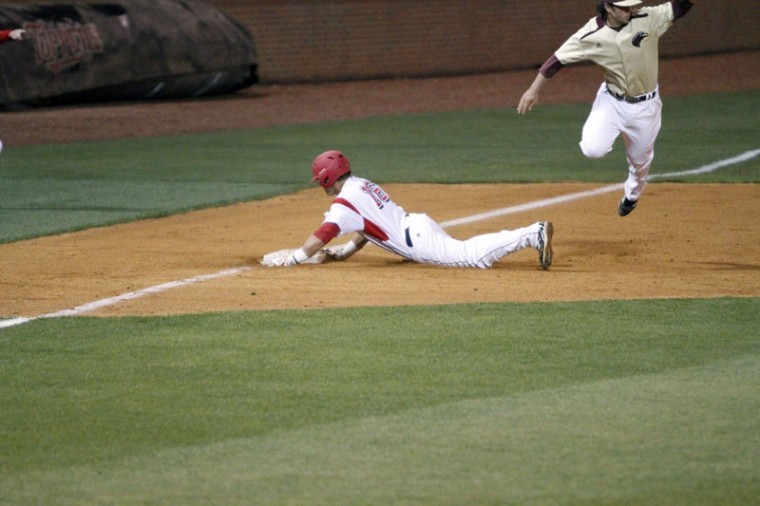 Senior Casey Dykes slides into third base during the WKU vs. Louisiana-Monroe series opener Friday night at Nick Denes Field. The Hilltoppers were defeated 14-6.

WKU had just tied the game at 5-5 in the bottom of the sixth inning Friday and seemed to have momentum on its side.

But Louisiana-Monroe exploded offensively when it posted a nine-run seventh inning.

Seven Warhawk batters came to the plate in the top of the seventh inning before WKU recorded its first out.

Senior right-hander Ross Hammonds came on to begin the seventh inning for WKU on the mound. Hammonds had been one of the Toppers most consistent relievers this season.

However after a leadoff single by shortstop Jeremy Sy, first baseman Joey Rapp doubled on a line drive to right field to give ULM a 6-5 lead.

Hammonds proceeded to load the bases before ULM accounted for back-to-back-to-back RBI singles that opened up the game at a 9-5 Warhawks’ advantage.

ULM scored five more runs during the inning with the help of a two-RBI single by second baseman Caleb Clowers and an RBI triple by Sy.

Sy finished his night with a 4-for-5 effort while crossing the plate three times.

Hammonds and junior right-hander Colton Satterlee combined to pitch 1/3 of an inning while allowing nine earned runs on eight hits.

Freshman left-hander Ian Tompkins came on to record the final two outs and closed out the game.

The game began with an hour and 30 minute rain delay.

When it finally got underway, the first six frames of the game were back-and-forth between ULM and WKU.

WKU took a 1-0 lead in the bottom of the first inning on an RBI single by senior right fielder Ryan Hutchison.

However, ULM gained the lead in the top of the second inning with the help of a two-RBI double by designated hitter Corben Green to make it 2-1.

The Toppers answered with a run of their own in the bottom half of the inning on an RBI double by senior center fielder Jared Andreoli to tie it and took a 4-2 lead after three innings of play.

The Warhawks regained the lead at 5-4 before WKU tied it up in the sixth inning.

However, ULM used its nine-run inning to end the threat of any more lead changes.

WKU will look to even the series at 12 p.m. Saturday as junior left-hander Tim Bado takes the mound against ULM.