WKU gets first hit in the ninth inning, rallies for 4-3 victory 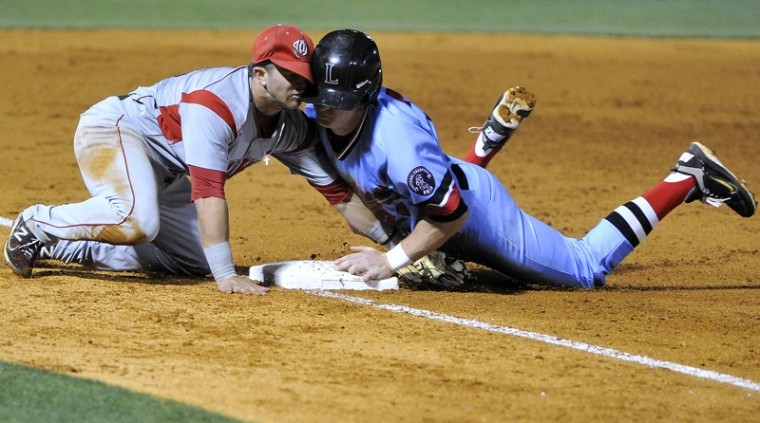 Senior infielder Casey Dykes tags Lipscomb runner out as they collide at third base. WKU won 4-3 against Lipscomb Wednesday night at Dugan Field in Nashville, Tenn.

NASHVILLE — WKU faced a 3-0 deficit and a potential no-hitter going into the ninth inning against Lipscomb on Wednesday night.

The Bisons seemed to be well on their way to an easy win over the Toppers, who hadn’t recorded a hit all night.

Head Coach Matt Myers said the comeback was huge coming off a 7-0 shutout loss to Belmont just a night before.

“It felt unbelievable,” Myers said. “I thought those guys need that. I told our guys after last night I thought our effort was bad and I told them that’s not us when we don’t play with energy and passion.

Trailing 3-0 in the top of the ninth inning, sophomore first baseman Scott Wilcox reached first base on an error by Lipscomb first baseman Griffin Moore to lead off the inning.

Senior third baseman Casey Dykes and senior right fielder Ryan Hutchison then drew walks to load the bases for WKU with no outs.

Bisons right-hander Tyler Burstrom threw a wild pitch that allowed Wilcox to score from third base and shortened the deficit to 3-1, while Dykes and Hutchison advanced to second and third base.

Junior designated hitter Adam Lavelle proceeded to single on a groundball to second base to give WKU its first hit and break up the no-hitter. More importantly it allowed Dykes to score and cut the lead to 3-2.

With the tying run on third base, junior catcher Ryan Huck lifted a sacrifice fly to center field that scored Hutchison and tied the game at 3-3.

WKU’s three runs in the inning all came while recording just one hit.

Junior right-hander Taylor Haydel threw a scoreless bottom of the ninth inning to keep the game tied and sent it to extra innings.

Senior center fielder Jared Andreoli led off the top of the 10th inning with a single to center field.

Andreoli reached second base on a wild pitch and was moved over to third on sophomore left fielder Jordan Cessna’s sacrifice bunt.

With Dykes at the plate, Andreoli came home to score on a wild pitch that would be the eventual winning run in a 4-3 game.

Haydel came back out for the 10th and pitched a 1-2-3 inning for WKU to secure the win.

“In the past, honestly, I think this team has given up,” Andreoli said. “But tonight we didn’t give up at all.

“We obviously had one of the toughest nights with no hits until the ninth. We just kept going and took advantage of what they gave us there at the end.”

The Toppers were out-hit 11-2 but found a way to rally for the victory.

Lipscomb scored one run in the second inning and tacked on two more in the bottom of the sixth inning on an RBI double by center fielder Zach Lowery and an RBI single by left fielder Ricky Coleman to take a 3-0 edge.

Right-hander Will Blalock started on the mound for Lipscomb and held the Toppers hitless over the first five frames.

However, it took three Lipscomb relievers to finish off the game in WKU’s comeback victory.

The Toppers will return home coming off a nine-game road trip to host Troy this weekend, with the first game set for 6 p.m. Friday.

Myers said the Lipscomb game showed the fight that his players have in them.

“That’s a testament to these guys to come back,” Myers said. “It shows that we’re resilient. Now we’ve got to do this again Friday night.”