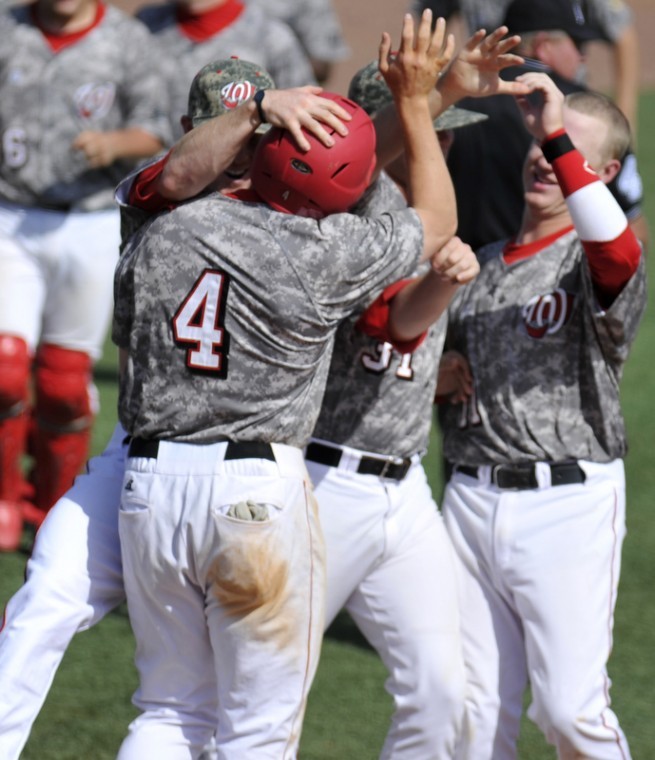 Senior Outfielder Jared Andreoli is congratulated after scoring the winning run off of a walk in the bottom of the eleventh inning Saturday at Nick Denes Field. WKU beat Lousiana-Monroe 7-6. JEFF BROWN/ HERALD

After trailing 6-3 in the sixth inning, WKU slowly crept back in the game while junior right-hander Taylor Haydel held down the Louisiana-Monroe offense.

“You can’t ask for anything better than that,” Head Coach Matt Myers said. “He was unbelievable.”

With one out in the bottom of the 11th inning, senior center fielder Jared Andreoli singled through the middle to get things going for WKU.

Sophomore second baseman Scott Wilcox grounded into a potential double play but Andreoli beat out the throw to second base to put a runner in scoring position with just one out.

Senior third baseman Casey Dykes singled on a groundball to the shortstop and ULM decided to intentionally walk senior right fielder Ryan Hutchison to load the bases for WKU with two outs in a 6-6 tie.

Hutchison was 2-for-4 on the day and had already recorded three RBIs.

However, junior first baseman Ryan Huck worked the count and eventually drew a bases-loaded walk to score Andreoli and give the Toppers a 7-6 walk-off victory.

“I was just looking for a pitch and I knew he was a one-pitch guy,” Huck said. “I swung at a couple of bad ones but then he did that.”

Myers said it was simply an “unselfish” at-bat.

“Most guys are probably going to swing there and try to be the hero,” Myers said. “He did a great job of making a guy throw strikes who wasn’t throwing strikes.”

Junior left-hander Tim Bado started on the mound for WKU and struggled to pitch 5 2/3 innings while allowing six earned runs on eight hits.

The Warhawks jumped on Bado early to gain the lead.

ULM first baseman Joey Rapp recorded an RBI single in the first inning while center fielder Brandon Alexander did the same in the second inning to take a 2-0 lead over WKU.

However, the Toppers would tie it up at 2-2 in the bottom of the third inning on a two-out, two-RBI single by Hutchison.

Both WKU and ULM tacked on lone runs in the fifth inning to remain in a tie at 3-3.

But the Warhawks would open up the game with a three-run sixth inning.

Bado recorded the next two outs in order before allowing an RBI single by left fielder Les Aulds that caused Myers to make a call to the bullpen.

WKU brought on Haydel to take over on the mound and clean up the mess.

Haydel allowed an RBI single off the bat of second baseman Caleb Clowers to give the Warhawks a 6-3 advantage before recording the final out of the inning.

But then Haydel locked in and WKU used its’ power to inch back in to the game.

Junior catcher Devin Kelly and Huck each belted solo shots that cut ULM’s lead to 6-5 heading to the ninth inning.

Trailing 6-5 in the bottom of the ninth inning, WKU made some two-out noise.

Andreoli singled and Wilcox drew a walk to put runners on first and second base for WKU.

Dykes was next up for WKU and had been 0-for-4 at the plate on the day.

However, Dykes came through with an RBI double that scored the tying run in Andreoli and sent the game into extra innings.

“That’s something we talk about and work on every day,” Dykes said. “You can’t control anything that’s happened in the past.”

Haydel continued to pitch solid relief for the Toppers to set up their 11th-inning walk-off victory.

WKU and ULM will play the rubber match tomorrow at 1 p.m. at Nick Denes Field.

Sophomore left-hander Austin Clay will get the start for the Toppers.