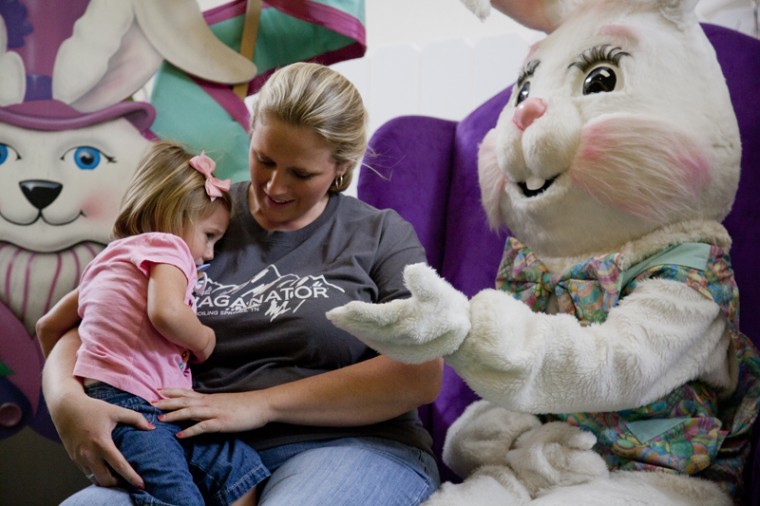 Every year, kids of all ages spill their Christmas wishes to Santa and smile big, or cry, for their photo with the Easter Bunny.

However, most of them grow up and never get to solve the mystery of who’s behind the mask.

But the code has been cracked for one of the bunnies at Greenwood Mall, and she’s right here on WKU’s campus.

Bowling Green freshman Kristina Johnson was thrilled when a family friend chose her for the part.

“I thought it would be fun,” she said. “I’m good with kids, and I like to entertain them.”

Aside from starring in “The Wizard of Oz” in high school, last year was the first time Kristina had taken on an acting role.

Regina Wilson, World Wide Photography manager, had no doubt that Kristina would be a great Easter Bunny.

Wilson, also a Bowling Green native, had one major criteria for the person they chose.

“Our big thing is a love for the part and making the kids experience good with the Easter Bunny,” Wilson said. “She has that natural outgoing personality, and she’s very approachable.”

Although her personality got her the part, it was a silent role.

Johnson and the other Easter Bunnies went through a day-long training session to learn the ins and outs of the job.

The Easter Bunny can’t talk while in costume and must hide out in the tornado shelter during shift changes.

Johnson said the hardest part was not being able to talk.

“Especially if a kid does something really funny, we can’t laugh,” she said.

She also has to know how to handle the kids that aren’t so fond of big, furry bunnies.

Last year, a child threw up because he was so scared.

“There’s a lot that like to cry, but I try to give them hugs or play with them,” Johnson said. “Sometimes they’ll scream, and you just have to back away.”

Overall, she wants every child to remember the Easter Bunny as part of a good experience.

“I want them to look back and remember taking a picture with the Easter Bunny and it being exciting,” Johnson said.

Wilson said Johnson goes over and above to make sure that happens.

“She’s very positive about the chaos and working with the public, especially parents,” Wilson said.

Johnson said she runs into more rude people at her other job at Buckhead Café.

“There’s a lot more rude people when you’re working with food,” she said.

Johnson’s family and friends find it funny that she’s the Easter Bunny.

Her younger brother, Ethan, said he teased her when she got the part.

“It was weird going up to the mall and seeing her in the Easter costume,” he said. “My parents even laughed about it.”

It’s all in good fun, though.

Ethan, a freshman at Warren Central High School, said she was entertaining when they were growing up.

“I thought it was good that she took the part, because she’s easy to get along with and works good with children,” he said.

“Kristina is one of my best workers,” she said. “She always does what it takes.”

Wilson may not have to look too far for her next Easter Bunny, though.

Ethan can see the bushy tail, big ears and big purple chair in his future.

“I would take on the role as the Easter Bunny,” he said.