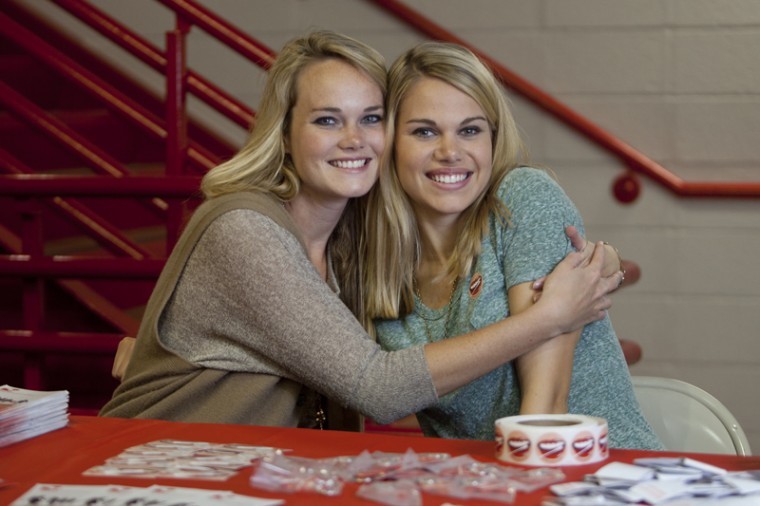 Louisville senior Alex Kimura and her sister, Sam, a freshman, organized a bone marrow donor registration drive that will continue today and tomorrow in the Preston Center. Alex started holding the drives on campus after Sam was diagnosed with aplastic anemia in 2010. “Finding a match is like winning the lottery,” Alex said.

For two sisters attending WKU, April 15 marked a turning point in both their lives, an event that would change their view on the world and chart a course for both their futures.

It was on that day in 2010 that Sam Kimura, now a freshman at WKU, received a diagnosis — she suffered from what is known as aplastic anemia.

“It was spring break of my junior year in high school, and I was sicker than I’d ever been,” Sam said.

After spending days in the hospital she received the diagnosis, and Sam learned exactly what it meant to have the rare bone marrow disease. She needed a bone marrow transplant, and fast.

Aplastic anemia is a bone marrow disease that causes the marrow to not produce sufficient numbers of both red and white blood cells. Without quick treatment, a person could die.

The best option for a bone marrow transplant is a sibling, as they share similar genetics, Sam said. But after testing her sister Alex, the two weren’t compatible.

From there, they looked on the national bone marrow transplant registry, but they still didn’t have any luck. Out of nine million people, not a single person matched Sam.

But Sam, a Louisville native, had a second option — a serum that she took for 10 days, eight hours a day that helped break down and then rebuild her immune system. Slowly but surely, she started to recover. She spent the majority of her summer in and out of the hospital.

It was during that summer that her family decided to put on a bone marrow drive at their church. Part of the driving force behind it was the small hope of finding a transplant donor for Sam, but that wasn’t all of it.

The sisters now had a mission: to continue registering bone marrow donors and educating everyone about the process and the need.

Alex, now a senior, brought that mission to WKU two years ago and has registered more than 1,000 donors. Out of that 1,000, six donors registered at WKU have been matched with patients in need of a transplant.

“When people do get in the registry, and they do get the call that they are a match, it’s like winning the lottery, it’s so rare to find your match,” Sam said.

Now, working with DKMS, an international bone marrow registry, both sisters together will be aiming to register even more students during the Greek Week Blood Drive in the Preston Center. Both the blood drive and marrow registration drive began on Monday and will be held from 10 a.m. to 7 p.m. on Tuesday and Wednesday. The sisters are aiming at getting at least 500 people registered through the drive.

“We’ve taken this on as a personal cause for our family,” Alex said. “We want to register as many donors as possible.”

To register to be a bone marrow donor, a cotton swab on the inside of the cheek and a complete registration form is all that’s needed.

A big obstacle to overcome in getting more people to register as donors is peoples’ fears about the bone marrow transplant process, which Alex said is not too painful.

“It’s a myth that donating marrow is really painful,” Alex said. “A lot of people think it is really scary and they don’t do it.”

However, the majority of the time donating marrow is just like donating blood, she said. The other times, Alex said, marrow must be taken from the hip bone, which is where most of the fear comes from. Alex said that it isn’t as bad as many make it out to be.

“It’s an outpatient procedure: You don’t feel any pain — you leave the next day, and you might be a little bit sore,” she said. “We are trying to let people know, you going through a little bit of discomfort can save somebody’s life.”

After college, Alex wants to travel around the country organizing bone marrow drives at colleges similar to the one at WKU. One of the big goals for the two sisters is to start up a national collegiate bone marrow registration drive competition. After Alex graduates, Sam looks to continue the WKU drive during her years at the university and hopes to keep moving her and her sister’s cause forward.

“We just want to let people know how important it is,” Sam said. “People always want to be heroes, and this is the perfect opportunity to do that.”