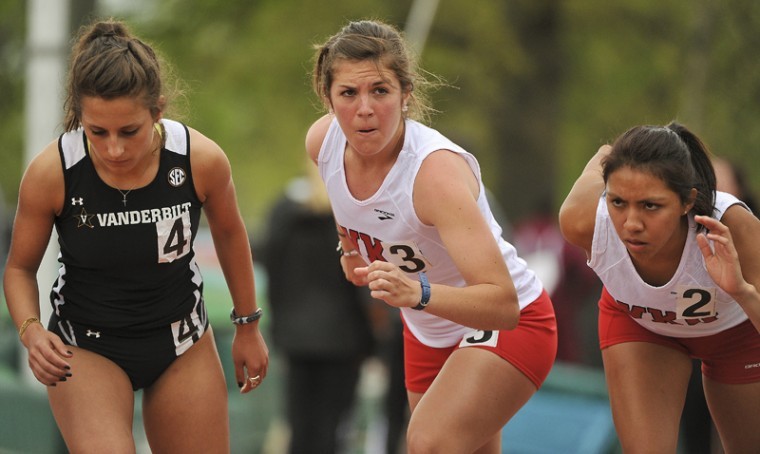 Louisville sophomore Anna Schreiner awaits the start of a race March 24 during the Vanderbilt Black & Gold Track Meet in Nashville.

WKU traveled on Saturday to Oxford, Miss., where they faced scorching temperatures and more than 30 schools at the Ole Miss Invitational.

Throwers and runners faced competition like Alabama, Mississippi and Southern Illinois, and they did so in temperatures that reached the mid-80s.

“There were a lot of great teams competing, especially in the throws,” senior thrower Monteka Flowers said. “I used the other great throwers there as a chance for me to be pushed to compete at a higher intensity… The environment was very competitive (Saturday) despite the weather, which was insane.”

Although Flowers felt that competition was tougher, teammate Houston Croney said that conditions were just hotter.

Croney, who moved into fourth all-time for the Topper record books in hammer throw during Vanderbilt’s Black and Gold Invitational, said he didn’t do as well as he’d expected.

“My technique was off… so I just have to practice harder this week to make next week better,” he said.

“Houston is right that he needs some technical improvement, but he also needs to develop more consistency,” Morehead said. “He had a really good hammer meet last week at Vanderbilt, so now he needs to work on stringing together a good series every week, and then string together several good meets in a row… when he is able to do that, then he will be in a position to hit some big throws at the end of the year when we enter championship season.”

Overall, Morehead said he was pleased with his team.

“For the throwers, it was a very good meet,” he said. “Any time you are at a meet with a team like Southern Illinois, the bar is raised, and that quality competitive atmosphere brings the best out of everyone.”

On the track side, senior sprinter Cailean Robinson, who said on Wednesday that he expected to race over the weekend, didn’t run.

Robinson has been out since pulling a hamstring during indoor season.

“My trainer said he was nervous to allow me to run, so my first official meet back will be our home meet,” Robinson said of the Hilltopper Relays on April 14.

As the teams split this weekend to travel to Bellarmine, Stanford and Florida, Robinson will work on his recovery.

“I will be attending a meet closer to home or just training through the week to prepare for my outdoor debut at home,” he said.

Senior sprinter Marcus Pope has also been saddled by an injury.

Sophomore Marcus Winstead, a teammate who is used to running with Pope on the 4×400-meter relay team, said that Pope was hurt right before his scheduled event to compete in the hurdles.

The Toppers earned four of the top eight finishes in the men’s 1,500 meters. Sophomore David Mokone led the pack with a time of 3:48.31. Joseph Chebet placed third overall and moved into fifth all-time WKU record books with a time of 3:51.11.

For the women’s team, sophomore sprinter Gelela Cooley clocked a personal-best time of 11.93 seconds in the 100-meter dash.

“I felt great this weekend,” Cooley said. “Competition was a little harder, but I did not let that get to me… I always get into my zone and tell myself to run my race.”

WKU’s women’s and men’s relay teams finished the meet by both placing third. The women passed the baton with a time of 3:45.01, and the men earned a time of 3:10.95 — 4.37 seconds faster than time clocked at Vanderbilt’s Black and Gold Invitational.

Sophomore sprinter De’Myco Winston said he was proud of his team with the competition they faced.

“It was good to see the 400 competition… Pretty good times were put up, but nothing spectacular. The 4×4 was good — just minor adjustments we need to make,” he said.