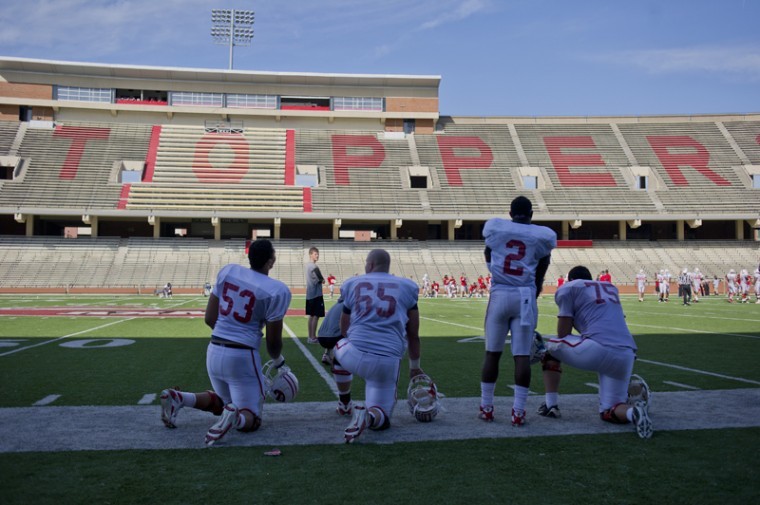 Junior running back Antonio Andrews had a lot of things to motivate him when he racked up 154 yards and four touchdowns at an intrasquad scrimmage on Saturday, such as securing a starting spot and making up for a slow offensive performance at the last scrimmage.

Turns out, his mind was on that night’s spring game draft, which WKU held after the scrimmage.

“You always want to be in that top five drafted, just so you know how you fit on this team,” Andrews said. “That really lets you know where you stand in the coaches’ eyes.”

The spring game, a public scrimmage between two squads of WKU players, will take place at 6 p.m. on Saturday at Smith Stadium.

Both teams had the opportunity to pick up two “free agents” before the start of the draft.

The red team took junior offensive lineman Sean Conway with the first overall pick to ensure some protection for Jakes.

The white team took senior defensive lineman Jamarcus Allen, who had seven tackles for a loss and two sacks in 11 games last season, with the second pick.

Head Coach Taggart is acting as “commissioner” for the spring game and said the draft is an opportunity for his players and staff to make the scrimmage more competitive.

“Our guys take (the draft) seriously,” Taggart said. “If they did not take it seriously, we would not do it. We are providing an opportunity for a team to win. Our coaches get excited about it, too, and they get competitive.”

While the white team will have Jakes, WKU’s starting quarterback, under center on Saturday, the red team will rely on redshirt freshman James Mauro, who was taken with the No. 19 pick in the draft.

Jakes had plenty of kind words for the rest of his offense on Saturday after practice.

“The O-line, I think that’s probably the best practice they’ve had all spring,” he said. “Then the running backs did their thing. They took care of the ball – no big fumbles, no big penalties. We came ready to play today.”

The running back collection will be split up as well.

The white team chose Andrews with the No. 11 pick in the draft and the red team took junior Keshawn Simpson with the No. 12 pick.

Taggart said the lineups will make for an interesting and fun game this weekend.

“At the end of the day, like I told our guys, we have to give the fans something to be excited about,” he said. “If we play like we have been this entire spring, I think our fans will be excited.”