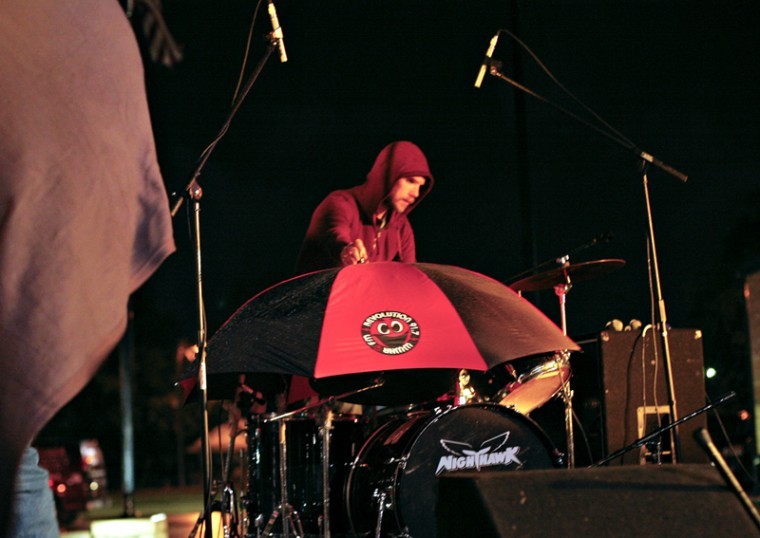 Josh Hines, drummer for Technology vs. Horse, moves the umbrella used to keep his drums dry during Mayhem. The annual outdoor music festival hosted by Revolution 91.7 was canceled due to rain.

Revolution 91.7’s annual Mayhem music festival at Circus Square Park in Bowling Green was canceled mid-show due to rain Friday night. The decision was announced via Revolution’s Facebook after postponing Technology vs. Horse by 20 minutes.

Students that made it out early were treated to local bands like The Fair-Weather Kings and Buffalo Rodeo, as well as out-of-town Tidball’s familiars like Bears of Blue River.

Headliners Morning Teleportation and Canago were also canceled, but the party continued at Tidball’s with Canago’s “Special 4/20 show,” with The Fair-Weather Kings.

For The Fair-Weather Kings, the cancellation of Mayhem was actually advantageous.

“I can’t say that I was too disappointed about the rain,” said band member Wesley Stone. “For us, it just meant two full sets and more people flocking to Tidball’s earlier.”

Stone said that the band later unanimously agreed that their Tidball’s show was the best the band had ever performed.

After that, Morning Teleportation played down the street at The Manor House with other local bands Schools and Heavy Chase.

Morning Teleportation singer Tiger Merritt said that despite the last minute change, he had a great time.

“I’m sorry we didn’t play for everybody we were supposed to get to play for,” Merritt said. “We were happy to just get to have a show that night.”