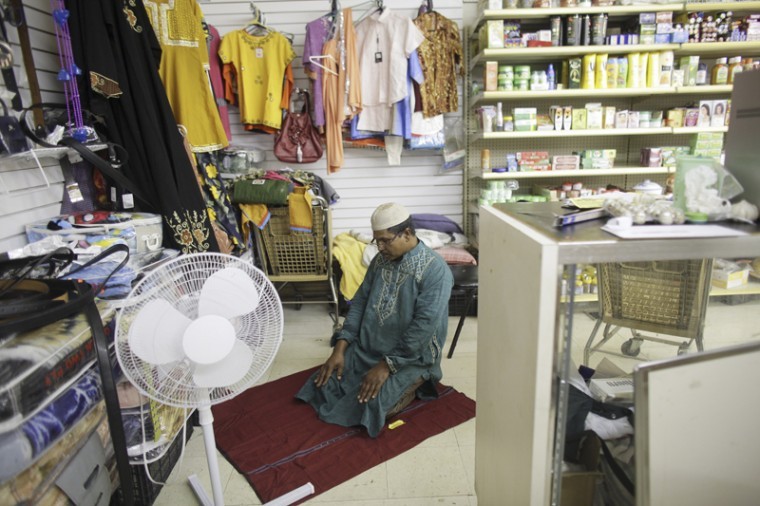 Ali Miah, who has owned and operated the International Supermarket on Broadway Avenue for the past six years, takes a break between customers to pray in a corner of his store.

Before anything else, humans need food to survive. And that’s the reason Ali Miah, since emigrating from Bangladesh 25 years ago, has worked in the food business.

“Food is the number one most important thing in life,” Miah said. “Number two is shelter, but food is still number one.”

After 19 years in Miami where he started out in a 7-Eleven and then opened his own market, Miah now owns and runs the International Supermarket & Café on Broadway Avenue in Bowling Green.

Miah, who is constantly organizing the shelves packed with goods imported from about a dozen countries, says he feels it is his duty to humanity is to provide people with ingredients for healthy meals.

Miah said he always has a suggestion for the best ingredient, whether it’s for one spice or a list of items for an entire meal.

“Even a Wal-Mart manager shops here because he likes the food and can’t find it anywhere else,” Miah said.

Because of Miah’s interest in linguistics, the wide variety of foods and goods aren’t the only international items exchanged in the supermarket.

By learning two words a day for just over three months, Miah said he found that gives him enough to keep a conversation going.

Now able to speak seven different languages, Miah casually cycles through several of them while at the store.  He’ll greet someone in Arabic as they enter the door or make a meal suggestion in Spanish to someone browsing the aisles before turning back to offer a simple goodbye as he finishes bagging another customer’s groceries.