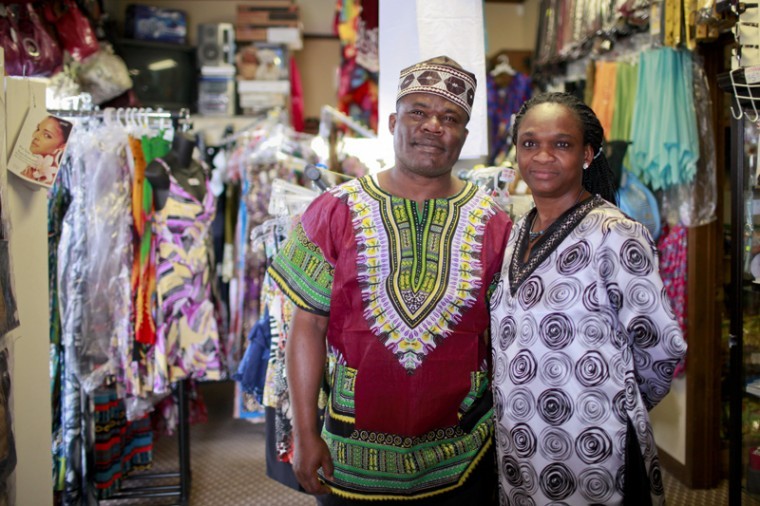 Emmanuel and Abiola Iyiegbuniwe, from Nigeria, started their store, KaCee International Market, in Bowling Green three years ago. The store offers a variety of authentic African clothing, food, jewelry and other items.

A little store in Hood Plaza on U.S. 31-W Bypass houses what nowhere else in Bowling Green does.

A step through the door and a lightly dinging bell overhead signal the gateway into a tiny piece of the rest of the world. Vibrant Indian dresses dangle from a rack ahead and natural shea butter in a melon sits by an office doorway, while smoked goat meat nestles near smoked fish in a fridge.

One of the last yams squats at the end of a shelving unit loaded down with natural peanut butter and beans from Africa.

“There’s no place you can find fresh yams in Bowling Green,” said Emmanuel Iyiegbuniwe, an associate professor of public health at WKU, boasts of his business, KaCee International Store.

Both from Nigeria, Emmanuel and his wife, Abiola, who received a bachelor’s in nursing from WKU in 2006 and is now working toward her master’s (MSN), came to Bowling Green from Illinois in 2003. They said it didn’t take them long to realize there was no store nearby where they could buy ethnic food.

It wasn’t very convenient, and the Nigerian couple said they knew others who were having the same frustrations with wanting African food closer to home.

“We decided to fill that niche,” Emmanuel said.

In late 2008, the Iyiegbuniwes opened KaCee International Store across from a Chevron gas station on Morgantown Road. After about a year, they moved to a better location downtown on Main Street. Being near a dollar store drew in crowds, the Iyiegbuniwes said, but the masses dwindled after the dollar store closed. They said they are pleased with their current location on the 31-W Bypass, despite the cramped space.

KaCee International Store is the only store in Bowling Green that caters to people of African descent. While international students frequent the store, domestic students also make purchases there. Emmanuel said some of those students have traveled to Africa for a mission trip or other purpose and come in the store asking for a particular type of food they’ve been missing since their visit to Africa.

James Asare, an associate professor of liberal arts and science on South Campus, is from Ghana and is in his second semester of teaching at WKU. Asare said he had heard of Emmanuel and that he taught at WKU but had not met him until he went to the store “looking for something African.”

Although the majority of the store’s products are not American items that most people in Bowling Green are used to, Asare said the store is not just for Africans but also for anyone interested in culture.

“When you go there and buy these things, you feel you are part of our culture,” Asare said.

Asare said he enjoys making KaCee International Store his stop for yams, phone cards and plantains but not because of the plethora of merchandise. Emmanuel and Abiola make the difference to him, he said.

“Their relationship (with customers) is cordial,” Asare said. “They are not there to get your money. They talk to you because you are a human being.”

“I think they have the qualities of owning a business,” Asare said. “I believe there is prosperity ahead of them.”

The Iyiegbuniwes also said that Bowling Green has changed in recent years with an astounding refugee influx.

“The city has changed,” Emmanuel said. “People are set in their culture. They love their ethnic food.”