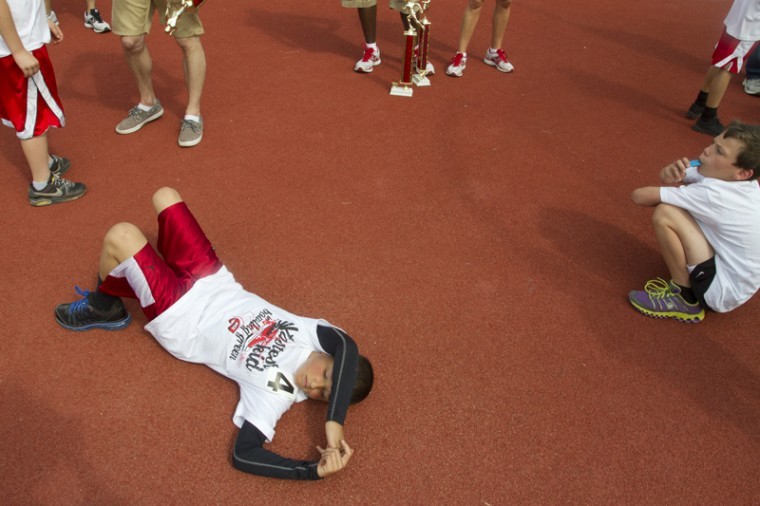 Jace Carver, 9, takes a rest after completing the “Fastest Kid in Bowling Green” race at the Ruter Track and Field Complex Saturday, a part of the Hilltopper Relays. The competition promoted fitness for elementary students.

Head Coach Erik Jenkins said he knew that something was missing from the Hilltopper Relays —  WKU’s only home outdoor meet of the season.

So on Saturday, for the first time in the meet’s history, fans at the Charles M. Ruter Track Complex watched first- through sixth-grade students competing in a 100-meter dash to see who would be named the “Fastest Kid in Bowling Green.”

Jenkins said he decided to incorporate the competition after seeing “another component” to other meets, like the Drake Relays or Penn Relays.

“Whether it’s elementary-age or high school-age competition at the meet, I just felt like there was nothing like that for this area,” he said.

WKU partnered with Bowling Green Independent and Warren County Schools in an effort to also promote physical fitness and secondary education. Physical education teachers from each elementary school held “preliminary heats,” to see who qualified to race during the meet Saturday.

Each student that competed in the race was dressed in a white “Fastest Kid in Bowling Green” sponsored T-shirt, shorts and running shoes.

Rita Ellis, Alvaton Elementary School’s physical education teacher, was present during the relays to support each of her students who competed in four of the age group divisions.

Ellis said she was informed about the race by an email from Lindsay Thomas, assistant AD of marketing and ticket sales at WKU.

Ellis said Alvaton teachers marked off a 100-meter distance on the school track, then timed students that wanted to run.

Ellis then selected the fastest times.

Carly Miller, a fifth-grade student at Alvaton and a student of Ellis, earned the “Fastest Kid in Bowling Green” title for the girls age group of fourth- through sixth-grade students. Miller said before she competed in the race she was quite nervous, but confident, in her abilities to win.

“When I crossed the finish line I felt really glad,” Miller said. “I felt like I was going to win it.”

Each student that was crowned “Fastest Kid in Bowling Green” for their division was given a trophy and bragging rights for the entire year.

Jenkins said he was pleased overall with how things went and is already excited for next year.

“I thought it was a good turnout. I’m looking forward to next year,” he said. “I think we now have a foundation because we got the administrators locally involved and also Western’s administrators and coaching staff … so I think it’s going to be a very good situation moving forward.”