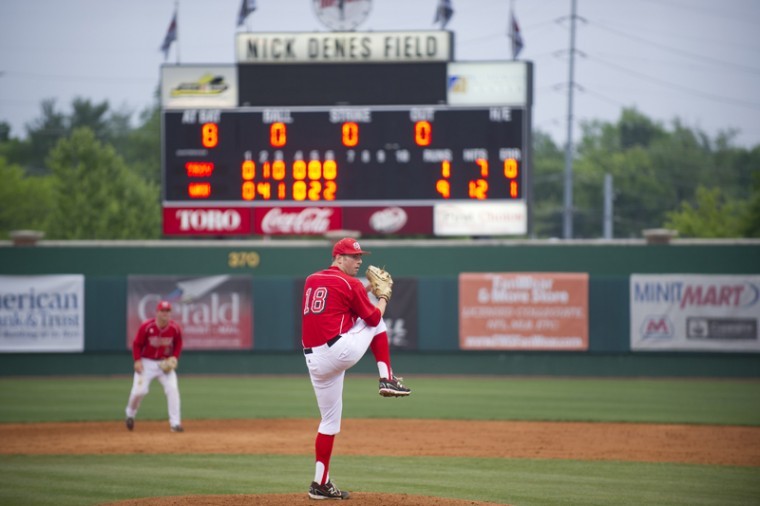 Less than a week after a 4-3 extra-inning Toppers victory, WKU and Lipscomb are set for a rematch at 6 p.m. on Tuesday at Nick Denes Field.

The Toppers traveled down to Nashville last Wednesday for a game in which they were no-hit for the first eight innings.

However, in the top of the ninth inning, WKU broke up the no-hitter but more importantly scored three runs to tie the game at 3-3 with the Bisons.

The Toppers earned the victory when senior center fielder Jared Andreoli led off the 10th inning with a single and eventually scored on a wild pitch.

Junior right-hander Taylor Haydel closed out the game and secured the win for WKU.

Head Coach Matt Myers said he’s excited just to be playing Lipscomb at home instead of on the road.

“We’re home now,” Myers said. “That’s the great thing — we’re not going back on the road for a couple of weeks.”

Myers said last week’s game against Lipscomb sparked some momentum for the Toppers.

“I’d love to come back out Tuesday, get the lead and see what kind of momentum this team can take,” he said. “I told our guys that they’re dipping into the kind of potential they can be right now.”

Lipscomb comes out of the weekend having been swept by Stetson and has lost its last six games.

Momentum seemed to be against the Toppers going into their game Saturday against Troy.

WKU had been shut out by Belmont earlier in the week and had been held hitless by Lipscomb through eight innings despite earning the victory.

The Toppers started off their series with the Trojans by getting beat handily 13-3 in Friday night’s game.

However, WKU rebounded to win both games Saturday and Sunday and saved itself from dropping a series to a team with a worse conference record.

Myers said it’s the same “fight” that has kept his team in it all season.

“We’ve been proving it all year,” Myers said. “We have that never-die attitude, which is the way I want these guys playing. We’ve never given up, and these guys won’t give up.”

The series victory also keeps WKU in the middle of the Sun Belt Conference standings and gives the team more momentum.

“To win after getting beat Friday is huge because now it brings momentum into the Louisiana-Monroe series,” Myers said.

After struggling at the plate for most of the season, junior catcher Devin Kelly put up big offensive numbers in the last two games of WKU’s series against Troy.

On Saturday, Kelly went 3-for-4 and drove in five runs.

Kelly capped off his weekend with a 3-for-5 effort on Sunday including two more RBIs.

The biggest hit, however, was his RBI single in the bottom of the 10th inning that gave the Toppers a 6-5 walk-off win over Troy in the rubber match.

The walk-off hit was Kelly’s second of the year.

“It felt great,” Kelly said. “I haven’t been hitting well for our team lately, and just being there to help us win is big.”

Tops powering up at home

Home runs have been scarce at Nick Denes Field for WKU this season.

Coming into the weekend against Troy, the Toppers hadn’t hit one over the home fences since junior catcher Ryan Huck hit two home runs on March 3 against Kent State.

However, WKU changed that this weekend with four home runs combined on Saturday and Sunday.

Andreoli lifted his first bomb of the season with his home run in Sunday’s game.

“Usually this field doesn’t carry very well,” Andreoli said. “But this weekend it did. I think we just happened to take advantage of it on the right week.”