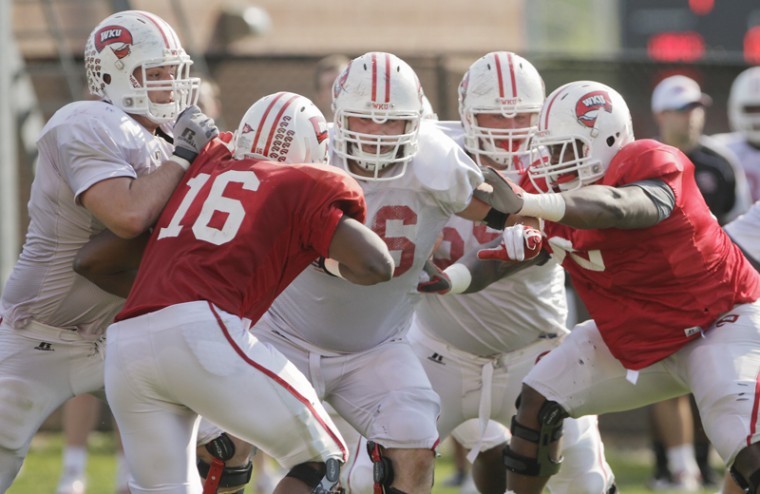 One of the biggest forces on the Toppers’ offensive line came from the unlikeliest of places — Murfreesboro, Tenn., home of WKU rival Middle Tennessee State.

Senior offensive lineman Adam Smith was born and raised just miles from MTSU, but several reasons convinced him to come to WKU once he graduated from high school.

“It was good to get away from home a little bit,” he said. “Everybody from my high school was going to Middle or that area — I just kind of wanted to branch out and get to know some different people.

“I liked the guys and the coaching staff here, too. I felt like I fit in.”

Smith grew up as more of a Tennesseean than MTSU fan, so the thought of playing for the Blue Raiders’ biggest rival didn’t bother him.

He said the initial reaction from people in his hometown was surprisingly positive, and he’s still received well by people he knows when the Toppers travel to MTSU.

“They were a little shocked, but overall, the people that matter, they were happy for me to get the opportunity to come up here and do what I enjoy to do,” Smith said.

Coming out of high school, Smith was recruited by WKU offensive line coach Walt Wells, whose brother Bobby coached Smith at his high school in Murfreesboro.

Walt has known Smith since he was in ninth grade.

“As he’s developed into a player and played so much, he’s become a leader,” Wells said. “A lot of it was by example, but now he’s gone on to be more vocal.”

Smith has been a starter in all three of the seasons he’s been at WKU and is at the top of the depth chart this spring.

Smith is expected to be one of Wells’ biggest weapons on the line in the upcoming season. Wells said he brings a lot of benefits to the offense.

“He’s played a lot of football, understands the game well and obviously has great size and has strength inside,” he said. “He brings a lot to the table.”

Head Coach Willie Taggart said he needs Smith to use his strengths to be a leader for the entire offensive line this season. He said Smith is motivated by the thought of playing professional football after he graduates.

“He’s coming in with the mindset that he wants to get better,” Taggart said. “I told Adam, I want him to play on Sundays, but he’s got to work that way to play on Sundays, and he’s been doing that ever since he’s been back. We asked him to lose weight — he’s lost weight. He’s been the leader that we’re looking for.”

Smith said he’s eased into his role as a leader for the team during his three years as a starter.

“I try to lead by actions more than anything. It’s something I’ve been trying to develop over time, and I think I’m really starting to get the hang of it,” he said.

He hopes the example he tries to set rubs off on the rest of the offensive line. Smith said he’s been pleased with what he’s seen out of his fellow linemen this spring.

“I’ve been proud of the guys so far,” he said. “I think we’ve made strides from last year and are going to keep getting better.”