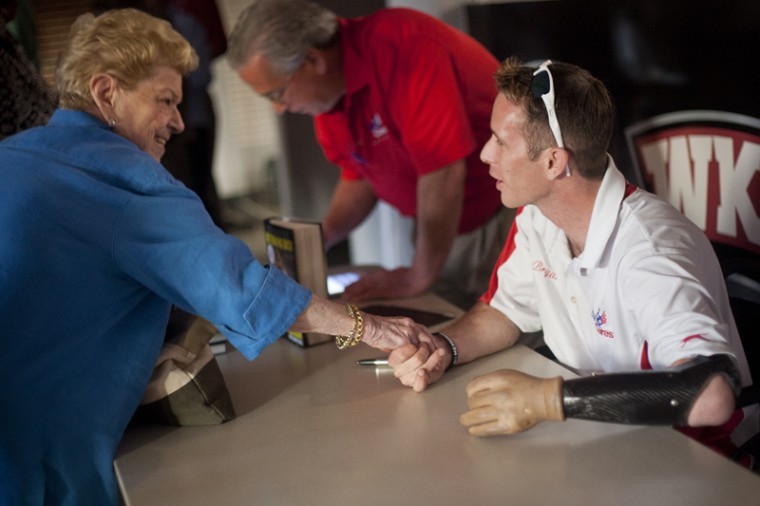 Bryan Anderson shakes hands and signs books after giving a keynote address in the Downing University Center Auditorium Tuesday evening. Anderson lost both his legs and his left hand when he was hit by an IED during his second tour of duty in Iraq and has since tried to live his life to the fullest.

Bryan Anderson received a standing ovation after giving an inspiring speech about keeping a positive outlook on life.

The Iraq war veteran lost both legs and his left hand after an improvised explosive device went off while he was deployed in 2005.

However, Anderson said nothing has changed since then. He still snowboards, skis and rock climbs, among other things.

Anderson spoke about his experiences in and post-Iraq to WKU students and community members Tuesday night at Downing University Center.

He told the story of the bombing in detail and his experiences afterward. He said he saw his family as soon as he woke up in the hospital, and that gave him strength.

“Not only was my mom there but my twin brother, my sister — my whole family was there, and that was all I needed to see,” he said. “That showed me that no matter what happened in my life, my family was going to support me, and that gave me the courage to just start doing what I wanted to do.”

Anderson said he worked hard at his rehabilitation and had a healthy mental state at first, but at one point he went through a depressed phase.

It took a trip to Las Vegas to see his best friend and a call from his brother to snap him out of it. Anderson’s brother gave him a Rise Against CD, and Anderson said he listened to the song “Survivor.”

“That resonated in me, and I felt like I grabbed the first rung of that ladder and was pulling myself out of that hole,” he said.

Anderson is the recipient of a Purple Heart award, has been featured on the cover of Esquire magazine and has made guest appearances on a few television shows. A few months ago, he worked with USA Cares to start the Sgt. Bryan Anderson Jobs for Kentucky Veterans Fund.

“It’s important for everybody to get jobs, especially returning veterans, because they have great work skills that don’t get utilized,” he said.

Besides finding jobs for veterans, Anderson said they are also helping veterans prepare for the work force.

“I wish more people thought like that,” Rice said. “It’s a great outlook on life.”

Rice is also an Iraq veteran and is currently working full-time in the National Guard in Bowling Green.

Prior to Anderson’s speech, singer and songwriter John Parr performed a few of his songs, including the 1980s hit “St. Elmo’s Fire.”

Parr, an English musician, said after visiting America in the 1980s and seeing how unfavorably veterans were treated back then, he decided he wanted to raise awareness for charities that help veterans.

Parr also played a song he had just finished writing the night before and that nobody had heard before, called “Nothing Has Changed.” He said it was dedicated to Anderson.

“The words ‘hero’ and ‘extraordinary’ are not used lightly,” Parr said. “And I couldn’t think of anyone more fitting or deserving of the words than Bryan.”