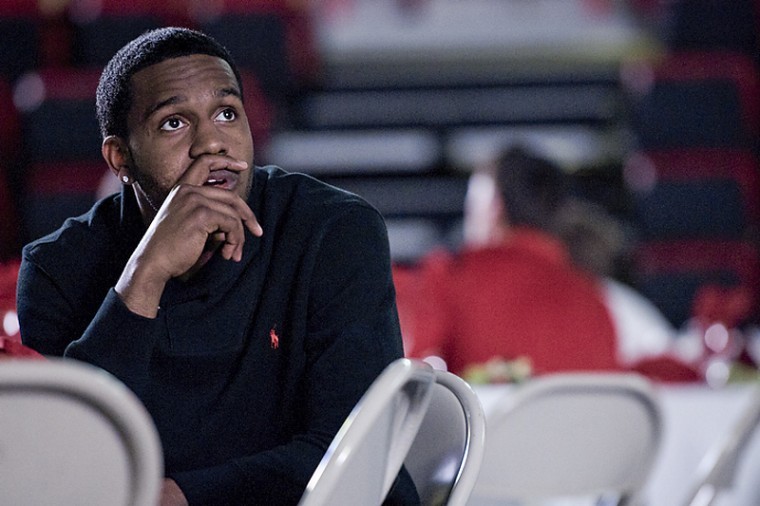 After winning four games during the Sun Belt Conference Tournament and making a run to the NCAA Tournament, WKU celebrated its 2011-2012 season with its annual dinner banquet and awards ceremony, held on the main floor of Diddle Arena.

Freshman forward George Fant received top honors as he was named the team’s most valuable player after averaging 10.4 points and 6.1 assists per game this past season.

He finished the season making 31 of his 34 free throws, averaged eight points a game and made the All-Sun Belt Tournament team.

During the ceremony, head coach Ray Harper acknowledged McDonald’s efforts throughout the season and said he knew he’ll do just fine in his next endeavors.

Jamal Crook led the team with 94 assists this season and was named the Dwight Smith Playmaker of the Year. Freshman T.J. Price, who finished No. 9 all-time in WKU freshman points, took home the Jim McDaniels Toughness Award.

Dr. Gary Ransdell was in attendance and spoke about the future of the team. He said he’s looking forward to seeing Kevin Kaspar, Stephon Drane and Caden Dickerson join the team next year after suffering from injuries.

Although Kaspar, a rising sophomore guard, missed the final two months of the season, he was still awarded the Danny Rumph Outstanding Teammate Award and the E.A. Diddle Award. The E.A. Diddle Award was commenced in 1971 and recognizes the student athlete who exhibits leadership, character, loyalty, ability and love to fellow man.

Kaspar said he was honored to be recognized throughout the night.

“It feels good and like coach Harper said, ‘it’s all about being a good teammate,’” Kaspar said. “I don’t care if I play five minutes, we all want to win and when I got hurt my mindset was only on helping my teammates out… I knew I wasn’t going to be able to play the rest of the season and coaches wanted me to stay positive all the time and I think that’s what I did.”

Looking into the future for next season, Harper spoke about how excited he was to sign Brandon Harris, a junior college guard from Oklahoma City. He compared the recruiting process to that of a marriage.

“We’re just getting started and the future’s so bright,” he said. “You don’t marry the first person you date.”

Harper on the banquet: “Tonight was just a chance to honor these young men on their accomplishments and it was good seeing the fans that came out.”

Harper on Brandon Harris: “I’m really excited about him. He’s a true point guard. He averages about 11 points a game and what’s most impressive is his leadership qualities. He averaged five assists, a little over one turnover and almost three steals per game. On the recruiting process I knew some of his people very well, being from Oklahoma City. The one thing that resonated was that he was a very good player but a much much better kid. We’re excited and happy that he’s gonna be a Hilltopper.”

Harper on the recruiting class: “We’ll be busy, and have a couple weekends here so that we can actually watch underclassmen, but we still need to sign two at this class and we feel really good about where we are. I think we’re gonna have a good recruiting class.”