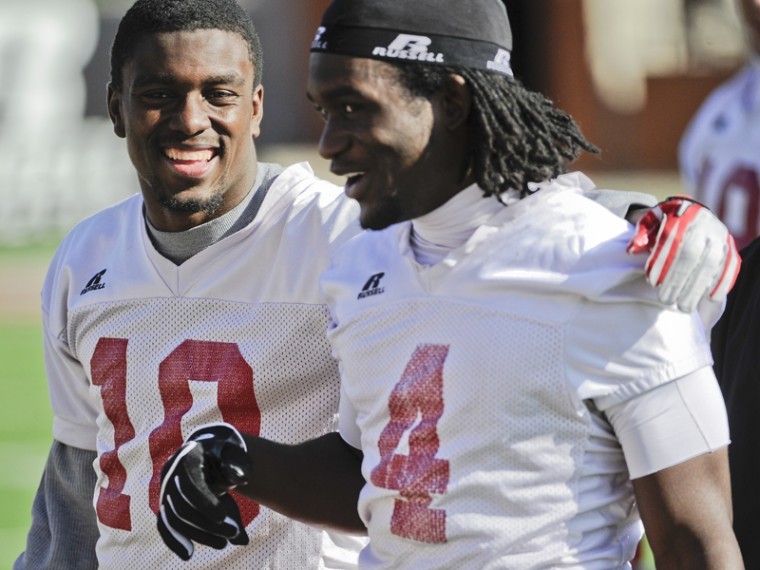 Senior quarterback Kawaun Jakes said there should be a clear winner when the red and white squads hit the Smith Stadium grass at 6 p.m. on Saturday for the annual spring game.

“I’m going with the Toppers,” Jakes said on Tuesday.

While the publicity would make it seem like the two competing squads are rivals, the spring game — like the rest of the practices over the past four weeks — is intended to be another chance for WKU to improve before the regular season starts in September.

But defensive line coach Eric Mathies, who will coach the red squad Saturday, said the scrimmage is an important part of the spring because it gives players a chance to really be competitive on the field for the first time since last season.

“We’ve got some guys that get excited to compete,” Mathies said. “Sometimes you just go out there and do it.

“They’ll do it and they’ll work hard, but when you compete and say it’s a win or a loss, I think our kids rise up to the challenge. That’s our whole team, really.”

He said that competitive nature is what he was looking for when he put his squad together.

“You look at our team and how we drafted. We drafted our top competitors on our football team,” Mathies said.

Head Coach Willie Taggart said it’s good to see his team embracing the chance to get a win, no matter what the stakes are.

“Our guys really get fired up when it comes time to compete,” he said. “Guys want to win, coaches want to win and that’s exciting to see.”

Saturday’s scrimmage, which is free to the public, will close out the spring practice season. The Toppers will not hit the field as a team again until later this summer.

One of the major differences between the spring game and a regular season game is clock management. The clock will run continuously throughout the second half of Saturday’s scrimmage, leading to a shorter half with more hustle from the players.

Taggart said while the team made a lot of improvements over the course of the last four weeks, there is still room for the Toppers to improve.

“I think as a whole we’ve gotten better at things we’ve wanted to — passing, throwing the football, protecting the quarterback and catching. Then defensively, tackling, we still can do a better job of that,” he said.

The Topper defense has drawn both praise and criticism from the coach this spring.

Taggart said he wants to see more speed from the defense, tomorrow night as well as next season.

“We want a fast defense that when a guy gets tackled. You want to see 11 guys to the ball every single time,” he said. “If we can do that consistently, we’re going to have a really, really good football team here at WKU in Bowling Green, Kentucky.”

Taggart said the added atmosphere of Saturday’s game should motivate his team to perform at a high level.

“How things were this spring, I can only imagine what it’s gonna be like in this game in front of a lot of fans,” he said. “I’m sure those guys are gonna come up, show up and show out on Saturday.”