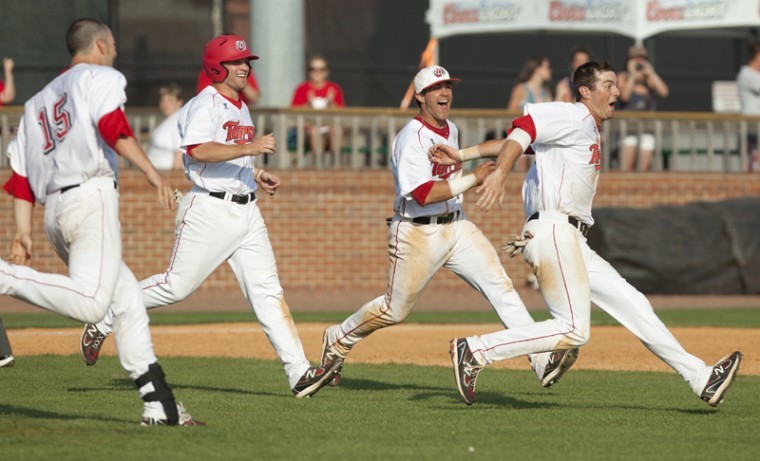 WKU players run onto the field after their 8-7 victory over UALR Sunday at Nick Denes Field. WKU lost to UALR Friday but came back to win the other two games of the series.

WKU (12-16, 4-5 Sun Belt) will take on a ranked in-state rival Tuesday for the second straight week.

Last Tuesday, the Toppers fell to No. 2 Kentucky by a score of 7-4 in Lexington.

Head Coach Matt Myers said he simply “can’t wait” for the matchup, given how the last few meetings have gone.

“It’s going to be a fun game,” Myers said. “Since I’ve been here, every game at Louisville has been competitive.”

However, the Toppers have lost the last four games at Louisville dating back to 2008 — losing by a combined seven runs over those meetings.

Senior third baseman Casey Dykes said they know they can play with the Cardinals.

“They have a good team, always do,” Dykes said. “We’re just looking forward to going down there. I feel like we can play with any team in the country.”

Nine regular players in Louisville’s offense currently have a batting average over .300 compared, to just five Toppers hitting at that clip.

But Myers said he’s confident in his offense.

“We’ll try to create some opportunities for our offense,” Myers said. “I love the way our offense has been playing.”

The Cardinals come in with a 17-4 record at home so far this season and have won nine of their last 11 games.

Junior shortstop Steve Hodgins said they can’t get caught up in the rivalry but instead have to treat it as “just another game.”

“Being in Louisville, it’s going to be a great game and great atmosphere,” Hodgins said. “We just got to accept the challenge and come to play.”

The Toppers are coming off a series victory over Sun Belt Conference opponent Arkansas-Little Rock this past weekend.

Myers said confidence coming off the series win will be key on Tuesday.

“We have to turn around and go play Louisville, who is really hot,” Myers said.