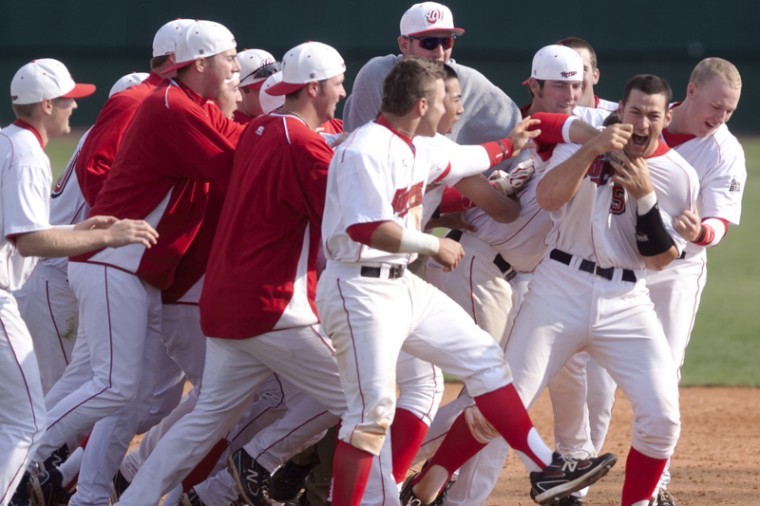 All of WKU’s momentum seemed to be lost Sunday after visiting Troy rallied to tie the game with three eighth-inning runs.

However, the Toppers regained focus and took advantage of their opportunities in extra innings.

Sophomore first baseman Scott Wilcox led off the inning with a walk.

Freshman outfielder Matthew Paculan was brought in to pinch run for Wilcox and was moved over to second base on a sacrifice bunt by senior third baseman Casey Dykes.

But with two outs, junior catcher Devin Kelly singled on a groundball to left field that brought around Paculan to cross the plate and gave the Toppers a 6-5 walk-off victory.

“I just went up there looking for a first-pitch fastball and I just tried to get the barrel out on it,” Kelly said.

Troy gained the early lead by posting a run in each of the first and second innings.

An RBI single by first baseman Logan Pierce in the first inning and an RBI single by shortstop Tyler Hannah in the second inning gave the Trojans a 2-0 lead over WKU.

The Toppers would answer with a run of their own in the bottom of the second inning on a sacrifice fly by junior second baseman Blake Crabtree to cut the deficit to 2-1.

WKU remained in a 2-1 hole until it rallied for three runs in the bottom of the fourth inning.

Kelly led off the inning with a single and junior shortstop Steve Hodgins proceeded to draw a walk that put runners on first and second base for WKU.

Junior second baseman Blake Crabtree advanced both runners into scoring position with a sacrifice bunt which set up a sacrifice fly off the bat of sophomore left fielder David Simmons, scoring Kelly and tying the game at 2-2.

But with Hodgins on second base and two outs, senior center fielder Jared Andreoli sent a 3-1 pitch over the wall in right field that plated two runs and gave the Toppers a 4-2 advantage.

Andreoli’s home run was his first of the season.

WKU added another run in the bottom of the fifth inning on an RBI single by Kelly to take a 5-2 lead that would hold until the eighth inning.

Down 5-2, Troy rallied for three two-out runs that would tie the game.

Hammonds came on and walked the first batter he faced.

With runners on first and second base, Pierce singled on a groundball to right field to plate a run and cut WKU’s lead to 5-3.

Troy third baseman Danny Collins then doubled on a line drive down the left-field line that scored two runs and tied the game at 5-5.

“It was tough because we got Ross Hammonds in there,” Myers said. “He just wasn’t as sharp with it being his second day. But he got out of it.”

WKU held off the Trojans from scoring any more runs in the inning and set itself up for an opportunity in the 10th inning.

Myers said it showed the kind of fight his club has to avoid completely collapsing after allowing the comeback.

“We’ve been proving it all year — you’re never out of it,” Myers said. “We have that never-die attitude which is the way I want these guys playing. We’ve never given up and these guys won’t give up.”

The Toppers will look to carry their momentum over in to two midweek games as they host Lipscomb on Tuesday and Austin Peay on Wednesday.