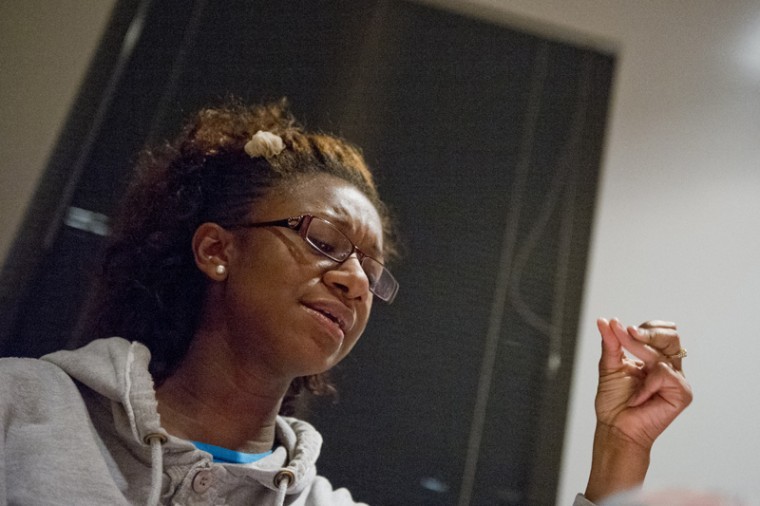 Nashville junior Mariah Tibbs practices with Amazing Tones of Joy, a student-led gospel choir that performs throughout the state, Tuesday at the Baptist Campus Ministry.

Whether she’s alone in a stairwell or on stage in front of a crowd, she’s serenading her emotions.

The funny thing is she’s actually shy. But Tibbs said she feels like a different person when she sings.

“I forget about being shy, let go and just sing,” she said.

In the fifth grade, Tibbs and her friend Victoria discovered they could sing while harmonizing one of their favorite songs.

The girls were eager to unveil their newfound talent.

“We started that journey together,” she said.

They entered a talent show and sang “Happy Face” by the R&B group Destiny’s Child.

Excited about the positive feedback, Tibbs looked for more ways to develop her craft.

“I never took voice lessons,” she said. “I just joined whatever choir I could.”

She entered the church choir and attended performing arts camps in the summer.

Above singing, Tibbs said she loves to worship and praise God.

“Singing in church is my release,” she said. “It keeps me humble, and it keeps me sane.”

When Tibbs came to WKU, she said she wanted to continue using her voice to spread the gospel, so she joined the Amazing Tones of Joy.

ATJ is a student-led gospel choir that travels across the state to sing at various churches and venues.

Tibbs serves as secretary and the soprano section leader.

“She sings soft and in high soprano,” Forrest said. “I wish I could sing like that.”

Tibbs said she’s often nervous when singing, but she’s good at hiding it.

However, some ATJ members can tell if Tibbs is nervous or not when she leads a song.

Tenor section leader Kevin Daniels, a sophomore from Bamberg, Germany, said Tibbs doesn’t fool him with her shyness, because he’s close friends with her.

Daniels recalled the first time he met Tibbs at an ATJ practice. Members got to choose how to introduce themselves to the group.

Forrest said Tibbs is good at improvising during a song if she gets nervous.

“If she forgets the words, she’ll make up her own,” Forrest said. “You’ll never know, because she just keeps going.”

Writing lyrics is another passion for Tibbs.

She recently penned a song called “Although” about wanting to leave a relationship but not having the courage.

“I write about what’s real — life, my situations, circumstances, experiences and emotions,” she said.

Tibbs finds inspiration from a variety of singers and performers. Her favorites are Beyoncé, Michael Jackson, India Arie and Jazmine Sullivan.

She said she wants to grow as an overall singer and nourish her talents.

“Any gift you have is from God and for his glory and his people,” Tibbs said.

Although she majors in biology, Tibbs wants to become a household name in the music industry.

Tibbs said she dreams of being the ideal performer.

“I want to do performances around the world dancing, singing, having my own philanthropy,” she said. “I see my name in lights like the ideal American Dream.”