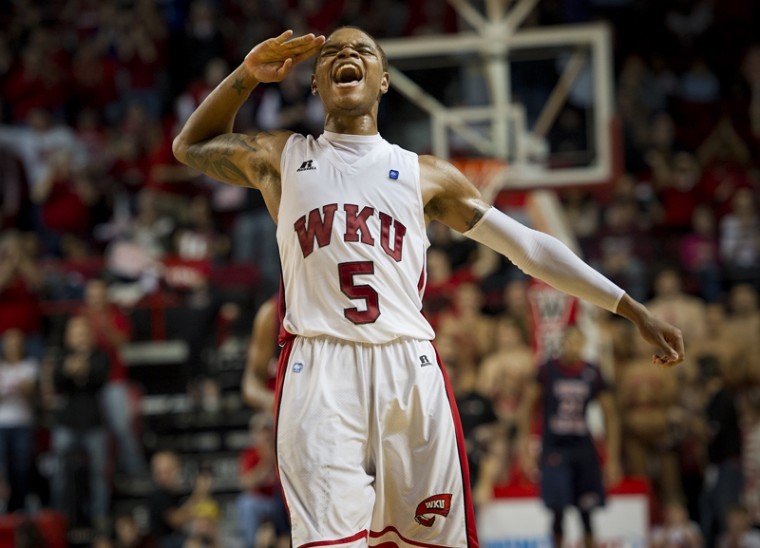 Freshman guard Derrick Gordon will transfer from WKU, a source confirmed to the Herald on Thursday. Gordon led the team in scoring and rebounding as a freshman en route to being named a Third Team All-Sun Belt Conference Selection.

After a season that gave fans renewed hope and optimism, WKU basketball received a big blow on Thursday.

Freshman guard Derrick Gordon, WKU’s leading scorer and rebounder, announced that he’ll transfer from the program to continue his basketball career closer to his home in Plainfield, N.J.

“This decision is not something I took lightly, and it came after many discussions with my family and the coaching staff. I have gone back-and-forth with this for many months,” Gordon said in a statement.

“It is important to me that my family be able to see me play more frequently and for me to be able to visit everyone, including my brother, more regularly, and I believe it is best for me to continue my playing career closer to home.”

Gordon entered WKU as a four-star rated prospect by Rivals.com — one of the highest rated recruits in WKU history.

He averaged 11.8 points and 6.7 rebounds per game on his way to earning Third Team All-Sun Belt Conference honors.

Gordon, who started all 35 games for WKU this season, helped lead WKU to a Sun Belt Tournament title and a berth in the NCAA Tournament, where the Toppers fell in the second round to eventual champion Kentucky.

He committed to WKU as a sophomore in high school and was largely responsible for helping bring other players to the program in his signing class.

Harper said he’s not worried that Gordon’s departure will cause a “snowball effect” where other players would leave as well. He downplayed the impact it would have on next season and those that follow, saying he sees “nothing different.”

“Don’t make this bigger than it is,” he said. “One player is not the WKU program.”

Harper said he had several talks with Gordon about the decision and they both came to the conclusion that it was in Gordon’s best interest to play closer to home.

“Derrick’s a unique kid. I think he just missed his family and it was tough on him,” Harper said. “We tried to support him in every way and we’ll continue to do that.”

Gordon hasn’t released any potential schools where he might continue his career. He’ll have to sit out a year due to transfer rules, unless he decides to play a Division II school, but that’s not something Harper thinks will happen.

“I just hope he has continued success on and off the court,” he said.