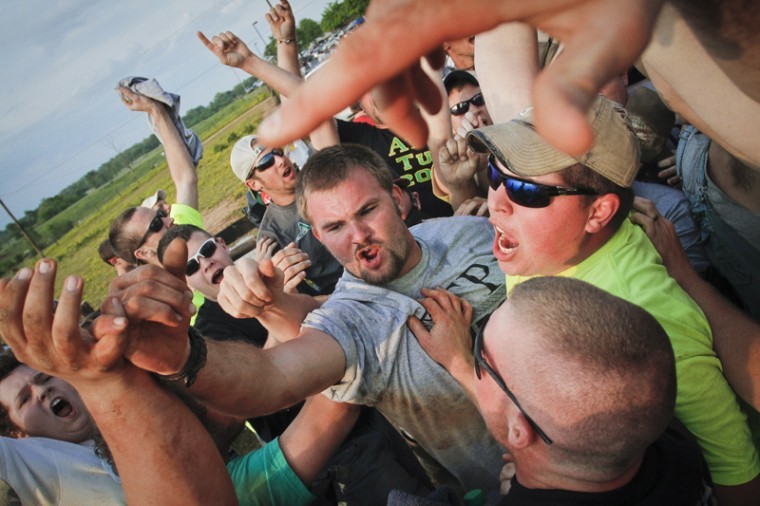 Phi Gamma Delta fraternity and Chi Omega sorority both walked away as the big winners from Greek Convocation on Sunday.

Fiji President Nick Burnett, a Louisville junior, said it was a pretty incredible feeling when his organization was announced the winner. He said this was the first year Fiji has won the award.

“It’s a testament to how hard these guys work, and I think it’s awesome,” Burnett said.

Burnett said a lot of the members of his fraternity look up to Jury.

“He’s really been an inspirer of some of the younger guys to find a good idea and really work hard to go out there and get it.”

Karen Towell was at convocation to present the award named after her to Chi O and to explain the meaning behind the honor.

“I am just delighted to be here, and I imagine there’s not 10 of you who knew I was alive,” she said.

Towell said the award was created after the many years she worked as an advisor for Alpha Omicron Pi sorority.

Chi Omega president Kylah Howard, a junior from Hammond, La.,  said she was “still shaking from all of this.”

Howard said the leadership of the seniors helped them win the award.

“I think we deserved it just because we’re hard workers, and we’re dedicated and we truly do love each other,” Howard said.

A total of 735 potential donors were added to the national bone marrow donor registry and 1,436 pints of blood were donated to the Red Cross during the three-day drive last week.

AGR President Kaelin Ditmore, a Franklin senior, said this was the first Greek Week his fraternity has won in 10 years.

“It’s something that’s been a long time coming,” Ditmore said.

Ditmore said AGR won Greek Week consecutively in the past and that his organization will start preparing for Greek Week for next year.

KD president Christy Culbreth, an Edgewood junior, said her organization was grateful and thankful for everyone involved, especially Greek Affairs for allowing them to participant.

“I think it was a blessing to win this year especially because of all the tribulations that we’ve gone through,” Culbreth said.

Culbreth said even if KD has a reputation for winning, it doesn’t mean it comes easy for them.