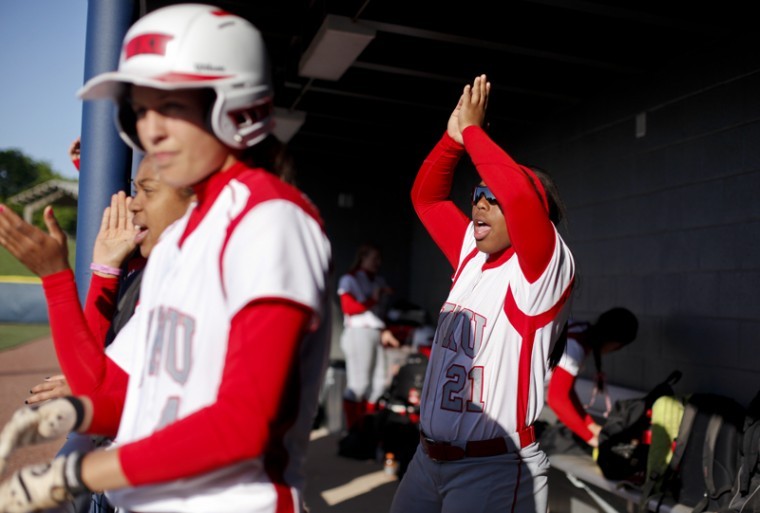 Sophomore Kelsie Mattox cheers while a Lady Topper is at bat during a game against Belmont at E.S. Rose Park in Nashville Wednesday. WKU defeated Belmont, 3-0.

NASHVILLE — WKU took its strong pitching on the road Wednesday, getting its third shutout win in a row at Belmont.

WKU (24-15-1 Sun Belt Conference) beat Belmont (8-27) 3-0 in a game where Lady Topper pitching continued their streak of 22 straight innings without giving up a run.

The first five innings were quiet for both teams. WKU had just one hit, coming on a first inning single by sophomore outfielder Kelsie Mattox, who was later called out at second on a steal attempt.

Junior right-hander Kim Wagner, despite being wild at times, had given up just one hit, had five strikeouts with one walk and hit two batters after five innings of work.

Freshman infielder Preslie Cruce backed up Wagner’s performance in the circle by breaking the scoreless tie in the sixth with a solo home run to left-center. It was her third home run in the last six games.

Sophomore infielder Olivia Watkins came up to bat with runners on second and third in the seventh and singled up the middle to score two more runs and bring the score to 3-0.

Junior pitcher Brittanie Albright pitched a clean seventh inning to get her first save of the season, giving WKU the 3-0 victory.

Albright has had limited time in the circle as she worked through some mechanical and confidence issues but said she felt comfortable getting some in-game action again.

“I felt good and confident. I’ve been working on that a lot,” she said. “That’s what I’ve been struggling on this whole season, and I’ve just been training that, listening to positive things.”

Albright had a strikeout in her inning-long appearance and didn’t surrender any hits on her way to closing the door for the Lady Toppers.

Head Coach Tyra Perry said that she was pleased with how Wagner and the rest of her pitchers have responded in practice after a winless series on March 31 and April 1 at North Texas.

“Situations like North Texas and the challenging practices that we’ve had after that, they either bring out the best in you or cause you to retreat,” Perry said. “So far, all of our pitchers have responded in a positive manner.”

Perry pointed out Wagner and Albright in particular. Additionally, sophomore Emily Rousseau has given up just two hits and recorded 15 strikeouts in her last 13 innings pitched. For the season, Rousseau is 11-7 with an ERA of 2.21 and 107 strikeouts. She leads the team in all three categories.

Perry said the way Albright pitched may earn her a start in the future.