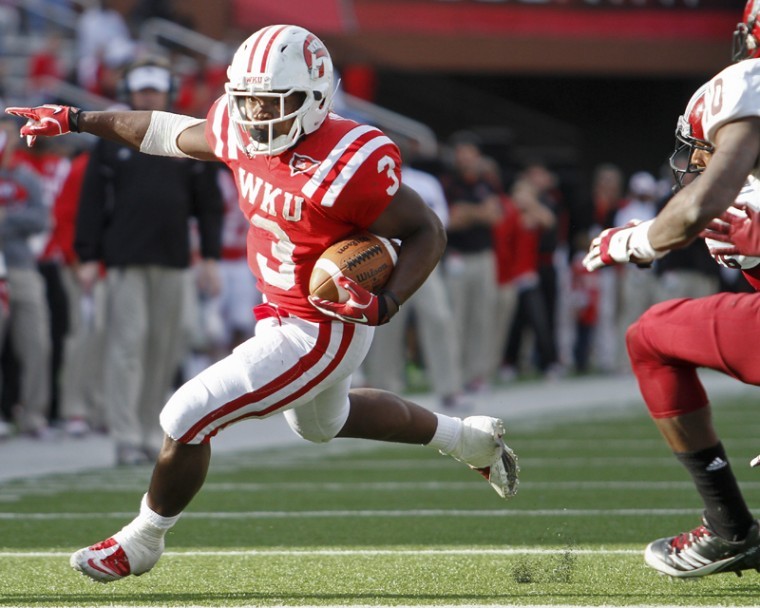 Senior running back Bobby Rainey charges through the defensive line Nov. 16, 2011, in a game against Troy at Smith Stadium. His performance in that game made him the all-time leading rusher for WKU and gave him the record for the most rushing yards in one season. Rainey was signed as an undrafted free agent on Saturday by the Baltimore Ravens.

WKU draft hopefuls Bobby Rainey and Derrius Brooks didn’t get picked up in the National Football League Draft this afternoon, but that didn’t mean the two seniors won’t get a shot in the pros.

Shortly after the draft concluded, both players signed with teams as undrafted free agents.

Harbaugh’s father, Jack, coached at WKU for 13 years until 2002, when he led WKU to the Division I-AA national championship. The Harbaugh family still has connections to WKU and Head Coach Willie Taggart, who was an assistant coach for John’s brother Jim at Stanford.

“Coach Harbaugh has been affiliated with Western for a long time and they run the same offense that we did here,” he said. “I’m just glad he could give me my chance.”

Brooks, a cornerback, finished his senior season with 33 tackles, 15 assists, four interceptions and one fumble recovery.

He received interest from the Bengals early on after running a 4.29 40-yard dash at his pro day. He called the signing “a dream come true.”

“I’ve always wanted to play in the NFL and now I’m just one step closer,” he said. “They gave me a free agent contract so it’s up to me now to go out there and grind hard.”

While both signed with teams, neither is assured of a spot on the roster for the upcoming season, which begins in September. They will compete for a spot on the permanent depth chart this summer.

Should the two make their respective team’s roster, they’ll face off in Week One of the regular season on Monday Night Football.

The afternoon looked grim for the pair of Toppers when the final pick of the draft was announced. Rainey and Brooks had to wait for teams to contact them as free agents, a process Brooks said was unnerving.

“Once they finished and picked the last guy in the seventh round, I just went outside and started playing basketball. I had to get my mind off it,” he said.

Rainey said he plans on making teams pay for not picking him.

“I’m excited to get a shot. I’m especially glad to get the opportunity to professionally prove everybody wrong who passed on me,” he said.

Rainey and Brooks now have to attend several minicamps over the course of the summer to earn a spot on the NFL roster.

Niether had been contacted yet with information about when and where to attend camp, though they will begin to figure out their schedules for the summer in the coming few days.

“I’m very excited to get the opportunity to play in the NFL, period,” he said. “Playing with those guys like [Ravens running back] Ray Rice, I’m ready to get started right now.”