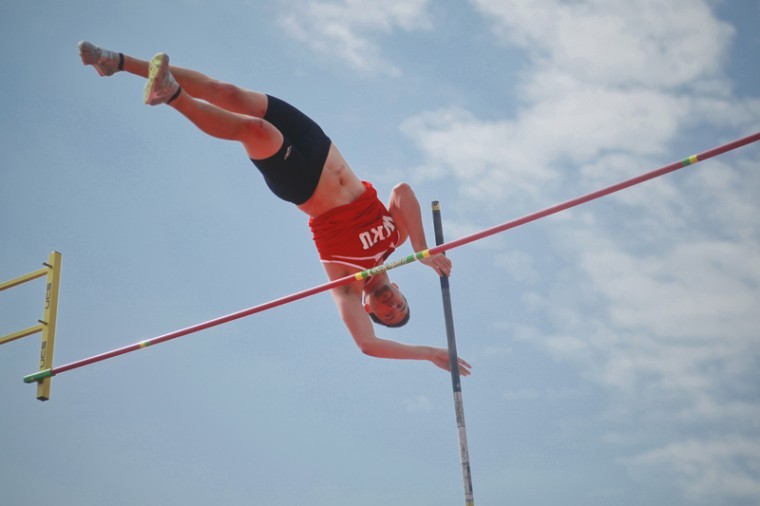 Saturday was filled with WKU athletic events, as the track and field team, softball team and football team all hosted home meets or games.

The track and field team was the first to kick off “Super Hilltopper Weekend,” as they hosted the Hilltopper Relays — the only home outdoor meet of the season.

Temperatures reached a high of 81 degrees, and for the fourth consecutive year tents and spectators surrounded the Charles M. Ruter Track Complex.

Murray State, Marshall, Kentucky State, Campbellsville and others competed in the meet.

In field events, the men’s hammer throw began the day, as WKU throwers took third, fourth and sixth place. Senior Buddy Price finished third with a toss of 179-08, while senior Brad Wright finished right behind with a toss of 178-00. Junior Houston Croney marked a toss of 169-06, earning sixth.

For the women, junior jumper Jade Nimmo had a school record-breaking day in the long jump. The Scotland native said weather conditions during the meet helped her jump further.

“It was windy, so I got the feeling of jumping far,” Nimmo said. “When you don’t have the wind, you just remember what it felt like when the wind pushed you.”

Senior thrower Monteka Flowers also had a groundbreaking day, earning top collegiate honors and first place finishes in both the shot put and hammer throw. Flowers had a season-best mark of 48-4.75 in the shot while also recording a throw of 179-8 in hammer.

Flowers said she was proud of her honors and hopes she can continue with the same efforts for the remainder of the season.

“I just hope that being the top collegiate athlete carries over for the next four weeks,” she said.

At noon, the men’s 3,000-meter steeplechase began the day for events on the track. WKU sophomore Peter Okwera competed in this event with a final finishing time of 9:07.88 — taking home second place.

Senior Marcus Pope won the men’s 400-meter intermediate hurdles with a new personal-best time of 51.38 seconds. Pope said even though it was his first time running 400 hurdles for the year, he wanted a better time.

For the Lady Toppers in the 400-meter intermediate hurdles, Irma Maciukaite also took first place with a time of 1:00.77. Her time ranks second on the Lady Topper all-time list in the event.

Kelli Winston, mother of sophomore sprinter De’Myco Winston, was one parent in attendance to see her child run.

After driving 15 hours from Ruskin, Fla., she said that she was just excited to see Winston run. Winston finished third in the 200-meter dash with a time of 21.52 seconds and said having his mother at the meet meant a lot.

“It felt like all the pressure to perform was taken off of me,” he said. “I was happy to see her.”

Throughout the day, students, fans and spectators shook hands with and spoke to President Gary Ransdell, who also attended the meet.

Ransdell said he was impressed.

“WKU’s very own Ignacio looks like he’s gonna be an Olympic qualifier in the javelin,” he said. “Today was great fun.”