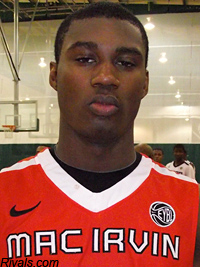 But not for Hales Franciscan senior Eddie Alcantara, a 6-foot-5 small forward who made his visit to WKU’s campus on the April 13-15 weekend.

“Me and my family travel a lot,” he said. “I’ve seen a lot of different places.”

His remaining list of schools includes Arkansas, Virginia Tech, Missouri State, and San Francisco, with a visit to San Francisco approaching on April 22-24.

He said his favorite thing about his WKU visit was learning about the school’s top-notch journalism program.

“I’m really into media, especially television production,” he said.  “That was a huge factor to me.”

As a junior at Hales Franciscan, Alcantara helped lead his team to the Illinois Class 2A state championship, scoring 15 points in a 61-47 win over Murphysboro High School.

Alcantara went on to average over 20 points and 10 rebounds a game as a senior, including shooting over 40 percent from 3 point range.

“My strongest part about my game is my hustle,” he said. “Nobody is going to outwork me on the court.”

Alcantara said one of the biggest factors in his final decision will be his relationship with coaches, adding he really liked WKU Head Coach Ray Harper’s coaching style.

“I’m a team oriented guy. Everybody likes to win,” he said.  “And those are the kind of guys Coach Harper wants here, I know my teammates would be just like me.”

Alcantara said fans can look for his announcement on his college decision near his upcoming birthday, May 1