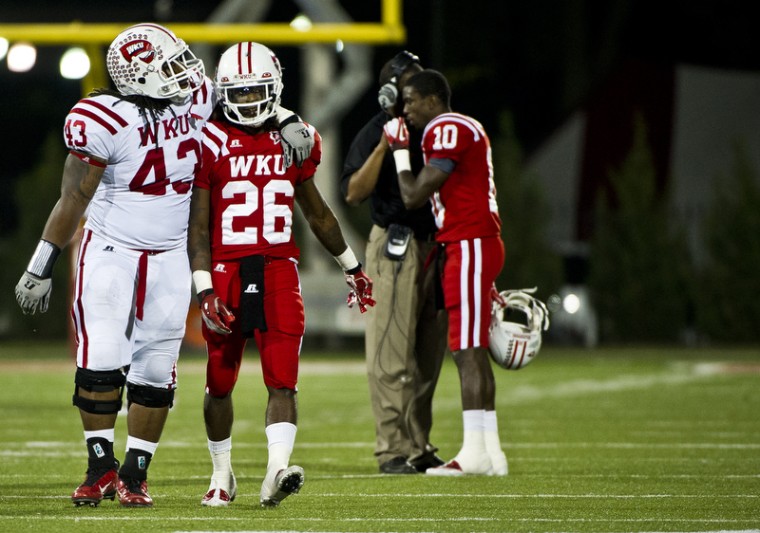 Senior defensive lineman Jamarcus Allen and sophomore running back John Evans share a moment after executing a play against the white time at the annual Red vs. White spring game at Smith Stadium on Saturday, April 14. The red team beat the white team 16-10.

A stellar performance by junior running back Antonio Andrews wasn’t enough for the white team on Saturday as the red squad came out on top in the annual spring game.

The red team, led on offense by redshirt freshman quarterback James Mauro and coached by defensive line coach Eric Mathies, finished the game with a 16-10 lead and got a victory to close out the 2012 spring practice schedule.

Head Coach Willie Taggart, who acted as “commissioner” while Mathies and quarterbacks coach Nick Sheridan coached the squads, said the scrimmage was a good capstone to the spring.

“Overall, I’m happy with this football team,” he said. “I love it. I think our Hilltopper fans will love this team as we continue to climb and continue to make it something special around here.”

Mauro was solid for the red team in his first action in front of WKU fans. He finished 12-of-21 for 107 yards and a touchdown pass to junior fullback Kadeem Jones.

Taggart said the freshman had a good game but made a few freshman mistakes, which accounted for his seven sacks.

“But that comes with experience and more time. I think you all can see we have a player there.”

The red team offense benefited from what could be a star-making performance by sophomore defensive back Jonathan Dowling, who was named the game’s MVP.

The former Florida safety had two picks, running one back for what turned out to be the game-winning touchdown in the fourth quarter.

Dowling said the credit for the pick-six should be given to the whole red defense.

“I felt like the D-line got real good pressure on the quarterback, that probably forced the bad throw,” he said. “Just the good defense that the coach put me in, they put me right in the perfect spot to make a play.”

Andrews was the white team’s star, though. The junior gained 123 yards on 18 carries, including a 34-yard run from his own 1-yard line in the second quarter.

His biggest play of the night came though the air. Andrews scored the only touchdown of the game for the white squad in the third quarter, breaking two tackles and running for a 56-yard score after catching a pass from Jakes. He finished with two catches for 67 yards.

Taggart said several times this spring that he’s looking for a No. 1 running back to help replace Bobby Rainey, though Andrews wouldn’t speculate on how Saturday’s performance might have helped him gain favor with the coach.

“Spring doesn’t matter. It’s all training camp,” Andrews said. “When you’re done with training camp, we’ll know who the starter is and we’re all competing.”

The spring game is the last time the Toppers will practice as a team this semester. They will not have on-field workouts again until June.

Taggart said the game on Saturday was a great way to finish the most successful spring the Toppers have had since his arrival almost three years ago.

“I’m very pleased. It was by far our best spring since I’ve been here, and that started back in January,” he said. “Our guys came with the right attitude and they finished strong.”