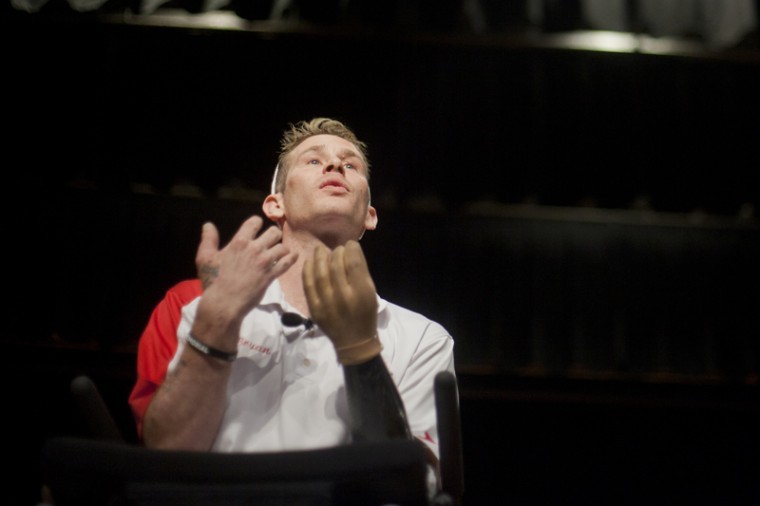 Bryan Anderson delivers a keynote address April 3 in the Downing University Center Auditorium. Anderson lost both of his legs and his left hand when he was hit by an improvised explosive device during his second tour of duty in Iraq.

Despite the fact that Bryan Anderson lost both legs and his left hand, he insists nothing has changed.

The Iraq veteran was injured after an explosion while he was deployed in 2005. He told his story to WKU students and community members on April 3.

Because of his experience, Anderson said he wanted to help veterans across the country, so he began working with USA Cares to help find jobs for veterans.

USA Cares is an organization that provides financial and advocacy assistance to post 9/11 military veterans and their families, according to its website.

“It’s important for everybody to get jobs, especially returning veterans, because they have great work skills that don’t get utilized,” Anderson said after his speech.

After being inspired by Anderson’s story, Bowling Green businessman Terry Scariot, who is a partner with Remington Partners, began working with USA Cares. Scariot eventually partnered with Anderson to create the Sgt. Bryan Anderson Jobs for Kentucky Veterans Fund.

“I was very impressed with the caseworkers’ care and compassion,” Scariot said. “I wanted to involve them with WKU.”

Since working together, the two have become close friends.

Although his father served in his younger years, he wasn’t able to talk about the experience until he was older. Scariot remembers his father telling him one day there were eight people playing cards, and the next day there were only four.

Scariot almost went overseas himself. He was enlisted to go to Vietnam, but the war ended right before he was scheduled to leave.

“By luck of time and place, I didn’t serve, even though I would have liked to,” he said.

Scariot also said his success in the business world  can be attributed to the soldiers fighting overseas.

“I’m trying to give back,” he said. “I’ve had a successful business career, and without the freedom that our soldiers protect, that might not be the case.”

The funding is available to graduating KCTCS or WKU veterans.

Loni White, communications manager for USA Cares, said the funds are to help veterans with any costs associated with finding a job.

“The unemployment rate of veterans is almost double that of regular citizens,” White said. “These are people who are mostly deployed more than once and are coming back without resources to find a job.”

White said this includes costs such as gas, hotel or plane ticket money to get to interviews, or moving a family across states after accepting a new job.

“We want there to be no financial barrier to the graduated veteran trying to get a job,” she said.

WKU is the only major university to be included in the funding, because Scariot is from Bowling Green, Scariot said.