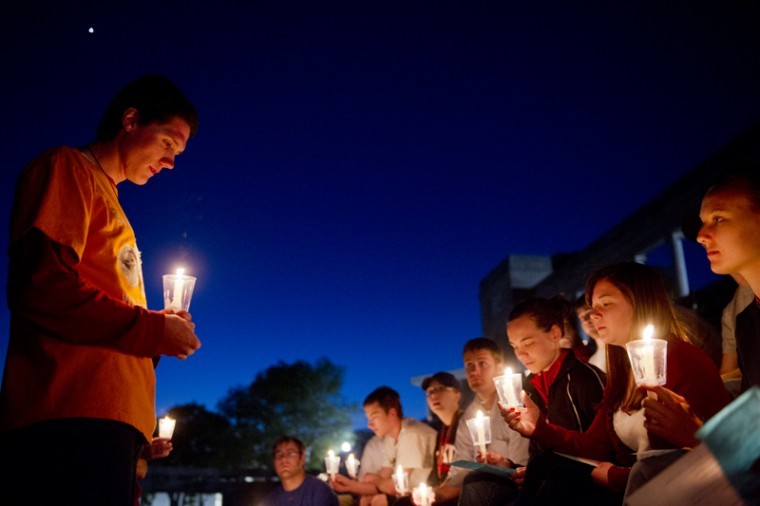 Shepherdsville junior John Sohl, the president of Hilltoppers for Life, speaks during a candlelight prayer vigil April 18 at the Colonnade. The anti-abortion group held a week-long display in the Colonnade last week of wooden crosses. Late in the week, a student not affiliated with the group placed condoms on the crosses as part of an “art display.”

WKU achieved national attention last week, though not the kind of attention it would have liked.

During the final night of the “Cemetery of the Innocent” display put on by Hilltoppers for Life, Bowling Green senior and art student Elaina Smith decided to make a statement, one involving placing several hundred condoms on the Popsicle stick crosses.

The controversy caused an influx of concerned emails from anti-abortion groups outside the university — more than 400 and counting — resulting in a reply statement by President Gary Ransdell. He said Smith has apologized for her actions and that the matter has come to a conclusion.

But in an emailed statement to the Herald, Smith said she never apologized.

Around 2:30 a.m. on April 20, Smith and a non-WKU friend placed several hundred condoms on the Popsicle stick crosses set up on the Colonnade that housed the display. The crosses symbolized the graves of the more than 4,000 fetuses aborted every day. The display was scheduled to be taken down at 6 a.m. the same morning.

That night, Smith posted a typed statement expressing her views on the issue on one of the bulletin boards positioned in front of the Fine Arts Center. Hilltoppers for Life placed the boards by the display for the purpose of allowing students to express their opinions.

The statement read in-part, “For me, each condom represents an unwanted pregnancy that could have been prevented. The subject of abortion is an important issue, one that stirs strong and sometimes conflicting emotions. Nonetheless, the question was raised: How do we feel about abortion? This is my way of answering in turn, and expanding upon the discussion of sexual health, practices and consequences.”

Her typed statement also said that it was project for her art installation class.

Matt Sohl, brother of Hilltoppers for Life President John Sohl, was keeping watch over the display that night and immediately contacted his brother after noticing two figures on the display. They proceeded to capture video footage of Smith and her friend placing the condoms and as they confronted her.

The brothers told Smith that they had permission from the University and had reserved the Colonnade for their display. One brother informed Smith that he would contact Students for Life of America.

“I talked to her and confronted her and said I’d have to contact the Students for Life of America because I don’t quite know what to call this,” Shepherdsville junior John Sohl said. “I don’t know if it is vandalism, but if it is and they instruct me to call the police, I have to. I’m listening to them.”

Students for Life of America, a national anti-abortion organization, told Sohl that it was indeed vandalism, and that he should call the police, which he did.

WKU Police arrived and told the brothers that the act was not vandalism and nothing could be done to stop Smith, as it was a freedom of speech issue, according to the police report. Police informed Smith and her friend that the only criminal charges that could be placed on them would be criminal littering if they decided to not remove the condoms.

According to the incident report, Smith said the intention was never to leave the condoms on and that she planned to remove them after taking pictures to document what she had done for class.

Once police informed Sohl of Smith’s intent to remove the condoms, Sohl said “that changes everything; that will be fine,” according to the incident report. The report states that Sohl’s primary concern was his group having to remove the condoms themselves as they picked up the display.

Police stayed on the scene to make sure the two parties remained peaceful, during which Smith voluntarily removed all the condoms she and her friend had placed after taking pictures to document what she had done for class.

Sohl said Students for Life of America quickly spread word of the incident and it continued to be picked up by national pro-life organizations, eventually getting picked up by Fox News.

Students for Life of America encouraged concerned citizens to contact WKU administration and Joe Harbaugh, WKU Police Captain of Professional Standards, to express their concerns. The contact was originally listed as Dennis George, dean of the University College, who was in no way affiliated with the event.

In reply to the hundreds of emails flooding into the university about the incident, Ransdell in his statement called the act disrespectful and distasteful and said both the faculty member teaching the art installation class, Associate Professor Kristina Arnold, and Smith have been spoken with regarding the incident.

Ransdell made clear that the assignment issued by Arnold was not directly targeting the Hilltoppers for Life display but that it was Smith’s own decision to voice her opinion on the subject in the way she did.

Smith did not deny her actions, but in a statement, she took issue with Ransdell claiming that she apologized.

“I do not ask that everyone agree with my point of view or the way in which I tried to express it,” Smith wrote. “However, I stand by my actions. I do not believe that I impeded anyone else’s freedom of expression. I did not break any laws. I did not damage any property. I voluntarily removed the condoms even though I was not required to do so. At the time, I thought that the matter had ended there.

“I do not feel that I should apologize for attempting to exercise the freedoms that we all are entitled to.”

Shortly after the university learned of Smith’s actions, it released this statement, stating in part, “Free speech — all free speech — is valued by WKU administration. Interference with the expression of free speech is not condoned and is not supported by WKU.”

Ransdell echoed that the university values the right to free speech, but not at the expense of others, in his own statement saying, “The University does not condone any attempts by individuals or groups to inhibit anyone’s or any group’s right to free speech or creative activity.”

It raises a question as to what exactly constitutes free speech on campus, and whether not a group can reserve a public space and forbid others from using it.

Sohl said that if Smith had erected a similar display on the section of the Colonnade that wasn’t covered by the Hilltoppers for Life display, and as long as she had permission from the university, his group couldn’t do anything about it.

However, Howard Bailey, vice president for student affairs, said that the campus is a free speech area and that if an individual wished to express their free speech, they are allowed to do so.

“As long as you were not violating any law or campus policies, free speech is just that,” he said.

Sohl said that his group is seeking for Smith to publicly apologize to Hilltoppers for Life. They’re also pushing to ensure that Smith does not receive credit for her assignment at the expense of their display, he said.

“Our big thing is, if she gets credit for this, to me it’s the same thing as if the university condoned it,” Sohl said.

Bailey said Smith’s grade for the project will not be released due to the Family Education Rights and Privacy Act, also known as FERPA.

Sohl said he’s fine with Smith having her own opinion, but it’s the way she chose to express it that is the problem.

“We gave plenty of outlets and ways for people to express their opinions, the whiteboards, discussions, all kind of stuff…,” Sohl said.

Arnold said she knew what Smith was planning for her project and warned Smith of the possible repercussions. However, Arnold said it wasn’t her place to tell Smith that her idea was wrong and that she couldn’t use public university property.

“I feel like my job is to give my students the tools to express themselves. One of those avenues is activism,” Arnold said. “My job as a teacher is to help them express what they want to express…it’s not to edit their ideas and tell them what I think is wrong.”

Arnold also said one of the rules of the assignment was to not alter anything in a permanent way, which she said would be disrespectful.

Mac McKerral, associate professor of journalism who frequently teaches a class regarding the First Amendment, said that he thinks the initial incident was an example of how free speech on a public university campus should operate and that it served as a good learning experience for all involved.

“As an exercise in the First Amendment, it was a beautiful outcome,” McKerral said. “Message is delivered; everybody goes home; OK.