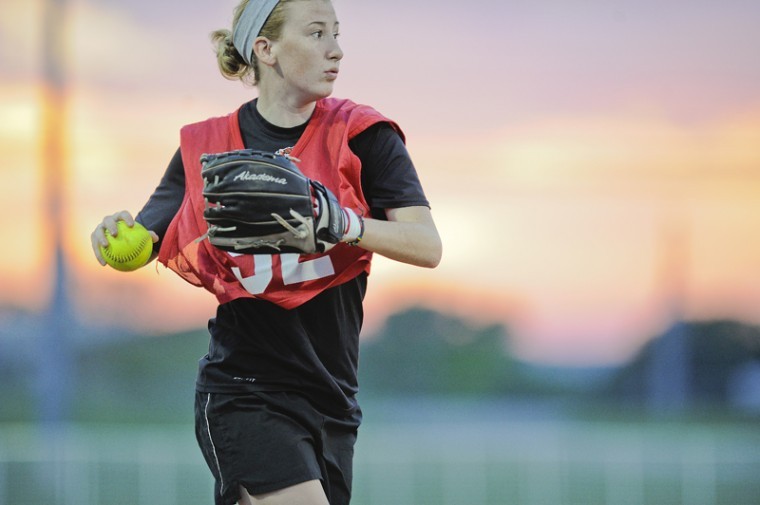 A member of I’d Hit That fields the ball during the intramural softball championship game at the Preston Intramural Complex Wednesday. The team won the championship 7-3.

Stormy weather threatened on Wednesday, but that didn’t faze the teams competing in the intramural softball championships.

The women took the field first, and I’d Hit That (IHT) won the title in extra innings by a score of 7-3 against Emanon.

“I feel like we did pretty good,” Louisville senior and team captain Allee Flener said. “We started out a little slow, but we definitely picked it up in the end.”

IHT got in an early hole after Lebanon freshman Ann-Morgan Reynolds scored an Emanon run in the first inning.

IHT tied it in the second, and the game remained tight until the eighth inning.

In that inning, IHT scored four runs and held Emanon to zero, clinching the women’s championship.

Flener and her team only played one game before the championship. IHT won by forfeit in the semifinals against The Volleyball Team.

She said she’s pleased with her team’s accomplishments in the short season.

Then in the men’s championship #ChicsDigTheLongBall used an explosive offense and solid defense to notch a championship win over Swingers.

#Chics took the game over in the third inning by driving in six runs to turn a 1-0 deficit into a 6-1 lead. Swingers tried to put their bats to work at the bottom of the inning but came out of it scoring one run only.

Neither team scored in the fourth inning, but similar to IHT, #Chics produced offensively late in the game. They scored another three runs to keep Swingers in a hole.

“At first I was a little bit nervous, but after we got out there, man, we started doing our thing,” he said. “We made outs, everybody hit the ball, but the situational running and defense did it.”

“We didn’t score that many runs today at all except for like, six in the third (inning),” Hardin said. “But our defense did it tonight.”

Hardin said it felt good to win a championship and he was glad his teammates could put it all together in the end.

“It doesn’t quite match up to winning a college world series,” Brown said. “But, man, it feels good to be a champion at WKU.”