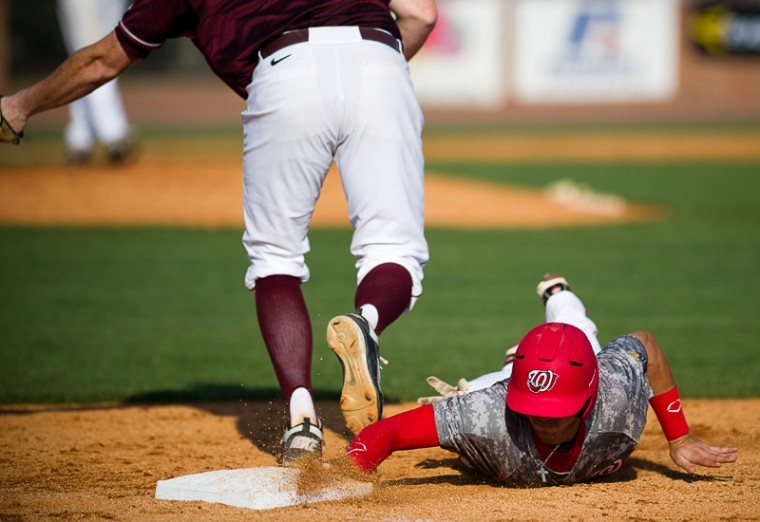 Junior shortstop Steve Hodgins is safe at first base after a UALR pickoff attempt during WKU's 5-1 Saturday win against UALR. The Toppers face UALR again at 1 p.m. on Sunday.

Head Coach Matt Myers said he wanted his team to rebound from Friday night’s loss to Arkansas-Little Rock by expecting to win the final two games of the series.

The Toppers put up two runs in each of the first two innings Saturday to get off to the quick start Myers had hoped to see coming off the series-opening defeat.

Myers said it was big to jump on the board early the way his team did.

“Whenever we can get the lead early and execute it really carries momentum in to the rest of the game,” Myers said.

The Toppers’ offense got it started in the bottom of the first inning when senior center fielder Jared Andreoli drew a walk and senior third baseman Casey Dykes singled with one out.

Andreoli and Dykes both came around to score on a two-RBI single by senior right fielder Ryan Hutchison that got WKU on the board with a 2-0 lead.

WKU used a couple of extra-base hits in the second inning to add a pair of runs.

Junior catcher Devin Kelly got things going with a one-out double and eventually scored on an RBI single by junior designated hitter Blake Crabtree to put the Toppers up 3-0.

Crabtree was picked off at first base for the second out but senior second baseman Ivan Hartle was hit by a pitch to keep the inning alive.

Andreoli, who had been struggling as of late, hit a fly ball to deep center field for an RBI triple that scored Hartle and gave WKU a 4-0 lead after two innings.

“It felt great for me to hit that triple, contribute to the team and do the things I need to do for this team to succeed,” Andreoli said.

Junior left-hander Tim Bado started on the mound for WKU and pitched a solid seven innings while allowing just one earned run on seven hits and recording nine strikeouts.

Myers said Bado simply “gave them a chance to win” which they were able to capitalize on.

“Bado was outstanding,” Myers said. “He competed, had four pitches going and kept them off balance.”

Bado said he felt “a lot better” Saturday coming off a start in which he didn’t feel he had everything working right.

The lone run UALR could manage was a solo home run by left fielder Sean Bignall in the top of the fourth inning that cut the Toppers’ lead to 4-1.

WKU added an insurance run in the eighth inning on a suicide-squeeze bunt by Kelly that scored sophomore left fielder David Simmons to make it a 5-1 advantage.

The Trojans had to use five pitchers over the course of the game.

Senior right-hander Ross Hammonds relieved Bado for the last two frames and earned the save while allowing no hits and issuing no walks.

The Toppers and Trojans will meet for the rubber match of the series at 1 p.m. Sunday.