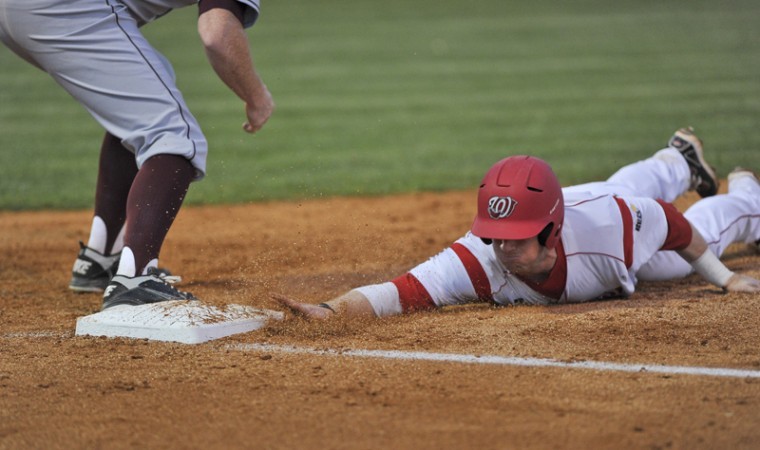 Senior infielder Ivan Hartle slides back to first after attempting to steal second Friday at Nick Denes Field against Arkansas-Little Rock. Hartle is one of five seniors on the roster for the Toppers.

ough the early portions of the 2012 campaign.

The mounting losses caused Head Coach Matt Myers to make a change in the lineup that he hoped would ignite the bats.

The change led to a 9-4 victory in the series finale against FIU and the Toppers have stuck with having the four seniors batting somewhere within the top five spots ever since.

Since then, WKU has posted a 3-2 record, with one of the losses coming at the hands of No. 2 Kentucky.

Myers said he decided to make the change to the seniors because they’re the players who will have to carry the load in order for the offense to get going.

“I tell them every day they have is one less day they’ll get back,” Myers said. “They need to take control of the situation. It’s in their hands.

“It’s on them. They’re in the situations where they need to execute.”

Myers said he’ll keep them at the top of the order as long as they’re performing well like they have as of late.

“We’re going to go if those guys go, and we’re not going to if they don’t,” Myers said.

Hutchison said he and the other seniors embrace the change because they’re “ready for that challenge.”

“It says everything,” Hutchison said. “It says he wants the leaders to start it off, and everyone wants to follow the leaders. He’s looking to prove a point, and it’s worked so far.”

Hartle, Andreoli, Dykes and Hutchison are four of only five seniors on WKU’s roster — the other being senior right-hander Ross Hammonds.

Dykes has made the biggest jump, going from batting in the bottom-third of the lineup in 16 of the first 21 games he started to batting cleanup over the last five games.

While batting cleanup, Dykes has posted a .435 batting average with six RBIs.

Dykes said it’s important for them to provide senior leadership, especially with how tough things have been up to this point in the season.

“As seniors, that’s something the younger guys look up to — they look for senior leadership,” Dykes said. “That’s something Coach has stressed to us, and so we’ve tried to take it into our hands when we get the opportunity.

“We try to lead by example and just get the job done.”

Myers said he hopes they can set an example that sparks the younger guys at the bottom of the lineup, which already seems to be happening.

He said that’s just as important as his seniors performing well.

“If the bottom part of the lineup is creating some opportunities, then you can turn around and have  your seniors in bigger situations,” Myers said.

He said he doesn’t want to put too much pressure on them, but he simply wants them to have the biggest impact on the fate of their senior season.

“They don’t need to be here in May having any regrets,” Myers said. “I’m going to put it on their shoulders. I’d rather do that than have regrets.”