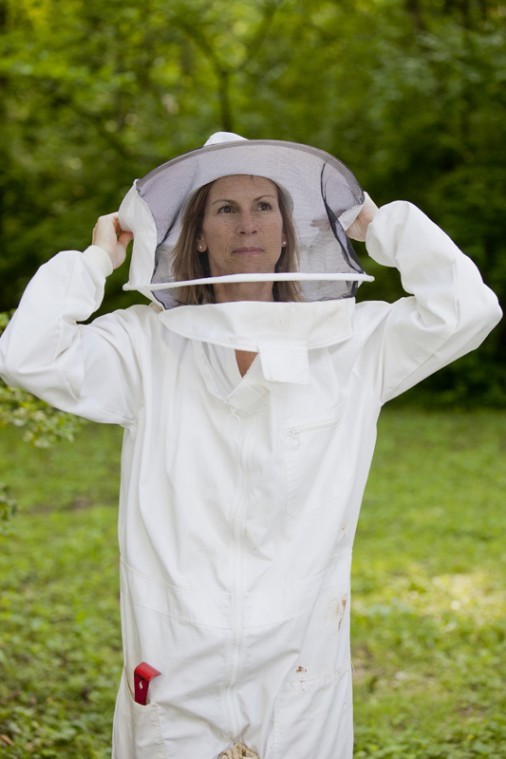 WKU alumna Elizabeth Easton Forbes of Bowling Green has been doing apiculture for three years, collecting bees and maintaining them in their honey bee colonies. 150 people attended the screening of the 2009 documentary “Vanishing of the Bees” that she hosted Friday in Mass Media Auditorium.

When walking down a path, most people see and a bee and ignore it. But when Elizabeth Forbes sees one, she stops to watch it.

Forbes, a Bowling Green city school psychologist, was introduced to beekeeping from a friend who took her to his hives in 2007.

“I call myself a ‘backyard beekeeper,’” Forbes said, since she doesn’t do it for money or honey cultivation.

She kept a native garden in her yard for years, growing plants that are native or indigenous to Kentucky.

“I don’t know that I would have ever come into beekeeping on my own, without knowing somebody who did to introduce me to it,” she said. “But it goes hand-and-hand with gardening, with pollination and everything like that.”

She currently has four hives, one located in her back yard and the other three on a farm on Slim Island Road, past Jackson’s Orchard.

Forbes has managed to find time in her schedule for the upkeep of her hobby. The 42 year-old mother of two loads her kids — Grace, 10, and Patrick, 7 — into the car and drives them out to the farm.

“My little boy just really isn’t into it, so it’s ‘Wait in the car’ or ‘Bring your homework,’” she said.

This January, Forbes made the decision to cut down her hours from full-time to part-time, allowing her to visit the hives during the day.

“You make time for it, because it’s a hobby. I want to see what they are doing,” she said. “It’s not hard to do when you love doing it.”

“It’s almost like a spiritual experience,” she said. “Everything they do has a purpose, and you can just forget about all the little mundane things.”

She described the way the social system works and that every bee is working to better the colony. Each bee has a job and a purpose, to better the whole.

Over winter break, she had the chance to watch the 2009 documentary, “Vanishing of the Bees.”

“It opened up my eyes to a whole different way of thinking,” Forbes said.

The film looks at the problem of honey bees disappearing for no apparent reason. Forbes said the filmmakers did an investigation and discovered it was because of the pesticides used on crops, causing brain damage to the honey bees, giving them loss of navigational skills and making them disoriented.

That left Forbes wondering: If this is what the pesticides are doing to the honey bees, what could they potentially be doing to humans? This is why Forbes took it upon herself to host a screening of the film at WKU.

Forbes discussed it with her husband, Dr. Lukas Forbes, an associate professor of Marketing & Sales, and decided to pay the $250 licensing fee for the screening.

She began connecting with people who could help her raise awareness.

Bowling Green native, Laura Goodwin, 36, said she helped Forbes make connections with those who could help her raise awareness.

“[It’s] almost a humanitarian passion she has,” said Goodwin, the event coordinator for SKY Farmers Market.

The film was shown on April 22, at Mass Media and Technology Hall.

“We chose to do it on Earth Day, to help celebrate earth,” Goodwin said.