Blitz steps down from MU soccer after 26 seasons as program’s founder, coach 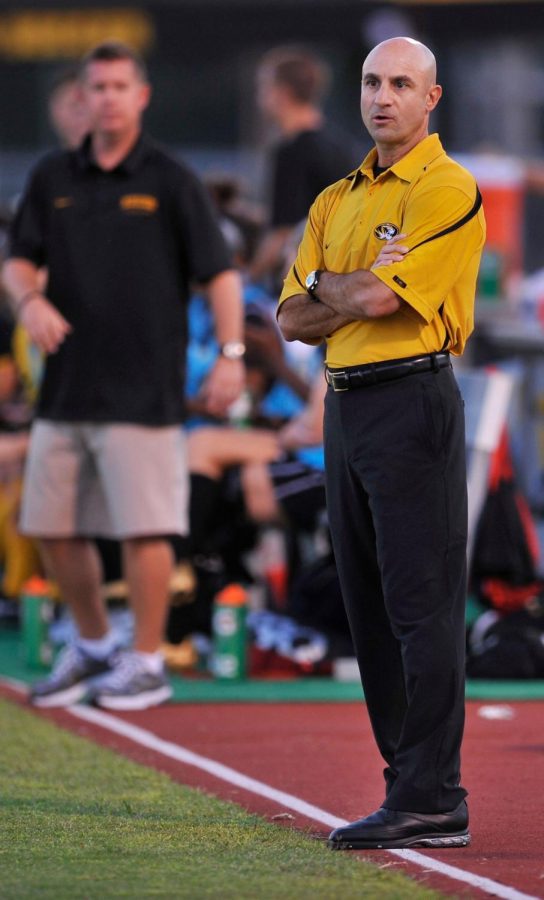 Missouri women's soccer coach Bryan Blitz stands on the sidelines on Sept. 17, 2010, during a game against Loyola at Walton Stadium. On Sunday, Blitz announced he'd be retiring from his post as MU's coach.

After 26 seasons, Missouri soccer will go through a change of leadership for the first time.

Bryan Blitz, the program’s founder and head coach since its first season in 1996, announced Sunday he would be stepping down from his longtime position. The announcement came the morning after what turned out to be his final game in charge, a 1-0 win over Kansas on Saturday at Walton Stadium.

“I have run my race,” Blitz said in a release. “After 25 years, it is time for me to step aside and spend more time with my family, including my wife Alie, my children Madison, Connor, Abigail and Oliver, and my mother and father, all of whom have been so supportive of this program.”

Blitz finishes with a 254-216-39 record with the Tigers, having secured his 250th Missouri win Nov. 1 against Kentucky. The team finished the 2020-21 season 6-5-3, falling in the quarterfinals of November’s Southeastern Conference Tournament. The fall portion of the schedule was conference play only, followed by a slate of non-conference games in the spring.

Saturday’s season-ending win over Kansas was Blitz’s 299th overall as a head coach, leaving him just short of the 300-win milestone. He began his head coaching career at Butler in 1991, leading a new program for five seasons before leaving to do the same at Missouri.

Blitz won conference coach of the year honors three different times with Missouri, most recently in 2015 in the SEC. He was inducted into the Missouri Sports Hall of Fame in January.

Despite Blitz’s long tenure as head coach, the Tigers have not experienced prolonged postseason success. In seven NCAA Tournament appearances, Missouri has never made it past the second round. The program’s best accomplishments have been a Big 12 tournament title in 2008 and a regular-season title in 2009.

Since its most recent NCAA Tournament appearance in 2016, Missouri has endured some of its worst seasons in program history, barely qualifying for the 10-team SEC Tournament in 2017 and 2018 before missing it altogether in 2019. The Tigers earned a winning record in 2020-21 for the first time since 2016.

Numerous Missouri soccer alumni are now playing professionally in the U.S. and abroad. In the National Women’s Soccer League, Sarah Luebbert is a forward for the Chicago Red Stars and Domi Richardson is a midfielder for NJ/NY Gotham FC.

Some former Tigers playing in Europe include Zoe Cross, a midfielder who joined England’s Lewes FC after graduating from MU in December, Kelsey Dossey, a goalkeeper for Spain’s RCD Espanyol, and Janelle Cordia, a midfielder for Italy’s Fiorentina who played at Hickman before moving on to Missouri.

Blitz said three of his four children were born at MU’s hospital over the years, and he said last year that his wife worked at the hospital as well. One of his sons, Oliver, was a manager for the soccer team in 2019.

“We are grateful for Bryan’s hard work, dedication and service to Mizzou Soccer over the last 25 years, and wish him and his family well,” athletic director Jim Sterk said. “Bryan put his heart and soul into this program while developing student-athletes who have gone on to have great success beyond the pitch.”