WKU’s season ends with loss to No. 1 Kentucky 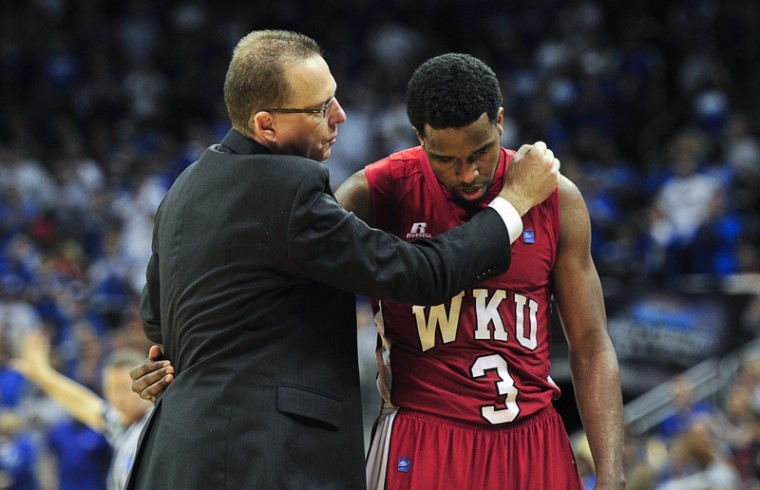 LOUISVILLE — The unstoppable force that was WKU for the past few weeks finally ran into an immovable object on Thursday night.

WKU’s unexpected postseason run came to an end at the hands of top-seeded Kentucky, 81-66, at the KFC Yum! Center.

Head Coach Ray Harper said he couldn’t have been more proud with how his team finished the season.

“It’s been quite a journey,” he said. “I’m just thankful I was able to be along for the ride. They’re terrific and you got to see a little bit about their character and their heart. They just wouldn’t quit.”

Heading into Thursday’s game, freshman forward Vinny Zollo said WKU (16-19) was “running on fumes.” A spirited WKU group finally ran out of fumes against a Kentucky team that was simply bigger and more talented.

“They ain’t the No. 1 seed in this tournament for nothing,” freshman guard Derrick Gordon said. “We just sort of rushed things in the first half. We didn’t get back in transition defense, and that messed us up a lot. We were doing some things we’re not used to doing.”

WKU dug itself a hole early by forcing shots and not making the open ones, allowing UK (33-2) to open the game on 10-0 run.

The first half proved to be a game of runs.

Zollo and junior guard Jamal Crook sat out most of the half with two fouls, leaving senior guard Kahlil McDonald, Price and Gordon to run the offense.

Price did his best to keep WKU in the game with 16 first half points, including two 3-pointers and going 4-of-5 on free throws. UK switched defenders on Price three times early in the half in an effort to contain him.

Instead, UK answered on the offensive end with 14 points from guard Doron Lamb and 15 points from forward Terrence Jones.

Jones added a powerful put-back dunk and Lamb drained a wide-open 3 to get the Wildcat-heavy crowd loud and on its feet as UK took a 45-26 lead into halftime.

That was a lead that even the Toppers, who have become known for their comebacks, couldn’t overcome.

WKU allowed UK to get in the bonus with 8:31 left in the first half thanks to several fouls on the other side of the floor. The Wildcats cashed in by making 11-of-13 free throws.

The Toppers were held to just 31.3 percent shooting while UK shot 61.5 percent.

WKU got little from freshman forward George Fant, the Sun Belt Conference Tournament’s Most Outstanding Player in the first half. Fant was 0-5 from the floor in the first half but finished the game with 13 points.

Price couldn’t duplicate his first half production, scoring just five points in the second half to finish with 21.

Meanwhile, UK’s depth proved to be a difference. Jones finished with 22 points to lead Kentucky, while center Anthony Davis and Lamb added 16.

WKU made a run at the end to cut the lead to 15, but it was too little too late.

The loss caps off a rollercoaster season with a mid-season coaching change, followed by an improbable run to win four games in four days to win the Sun Belt Conference Tournament and earn its first NCAA Tournament berth since 2009.

The Toppers won seven straight games after Harper had the interim tag removed on Feb. 19, with the only loss in that stretch coming against the nation’s best team.

WKU loses just one player — McDonald — and returns a youthful team that now has plenty of postseason experience, including two NCAA Tournament games.

“It was a lot of ups and downs,” Price said. “Sometimes, we didn’t always know if we could get through it all the way… But we came together as a team. We knew we were going to stick together to get through everything. That’s how we made that big run that we did.”

Gordon said he expects the returning players to keep working and end up in the Top 25.

“It was a good run,” Gordon said of the season. “We had a big turnaround as far as the coaching change in the regular season, then to win the conference and up to now. We’ve just got to keep doing what we’re doing and getting better and better.

“The freshmen have three more years, so we’re going to do big things.”

UK Head Coach John Calipari was impressed by WKU and said he too expects big things from this freshmen class.

“They’ve got a good program. I would imagine season tickets will sell out with what you saw because you’re playing three freshmen out there, playing young players,” he said. “Their freshmen gave us as much problems as anybody. So my hat’s off to Western.”

“We have a foundation — Derrick, T.J. and George — you’re talking about three freshmen that just went up against the No. 1 team in the country and they didn’t back down one step,” he said. “As they go on in their college careers, they can look back on this experience and really help any new guys that we have in the program about how we do things.

“I couldn’t be happier going back in the locker room with those guys. I’m going back with the right team.”