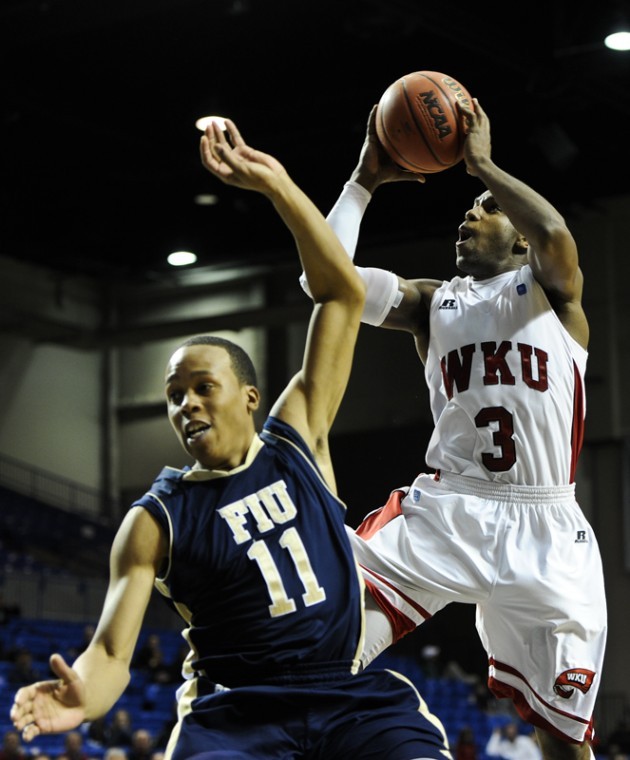 HOT SPRINGS, Ark. — Kahlil McDonald has been as vocal as anyone about wanting to win a Sun Belt Conference championship.

The senior guard from Brooklyn, N.Y., came off the bench in WKU’s first round game against Florida International on Saturday to make sure those chances stayed alive, scoring a career-high 19 points to lead the Toppers to a 67-63 win at Summit Arena.

McDonald hit several crucial 3-pointers, then regrouped the team in a huddle when FIU suddenly took a 52-47 lead with seven minutes to go.

It was the type of performance Head Coach Ray Harper said he expected out of his only senior.

“I thought it was exactly what we got, I even expected him to be better,” Harper said. “Kahlil has been terrific since about the Wednesday prior to our last two games. I thought coming in to this tournament, he was the best player we had in practice all week.

“I’m happy for him. He’s a senior, he’s really grown up. You’re remembered sometimes on how you finished and he’s finishing the way a senior should finish.”

Of those 19 points, 15 of them came from beyond the arc as McDonald went 5-for-8 from 3-point range.

The Toppers never trailed the rest of the way.

“I basically wanted to just come out and play hard,” McDonald said. “It’s do or die time. We ain’t dying right now.”

WKU led by as many as 12 just before the end of the first half, but the second half didn’t offer as smooth a ride.

The Panthers put together a 16-1 run midway through the second half to take a 52-47 lead. With freshman forward George Fant temporarily going down with an ankle injury, the momentum was in FIU’s favor.

That’s when Harper started to see the effects of a number of freshmen playing in their first postseason game.

“Most of these guys have been in big games, but it’s still their first college atmosphere as far as a college tournament,” he said. “You win and advance or you lose and go home.

“You saw it more so late in the second half when they started to make a run at us — like ‘oh, oh, here we go. What do we do now?'”

That’s when McDonald rallied the team in a timeout.

“Kahlil said ‘look, we’ve got to be tougher. We’re in great shape, let’s finish this thing,'” Harper said. “That’s good coming from one of your seniors — your only senior.”

“They punched us in the mouth and we had to be able to take a hit and come back, so that’s what we did,” he said. “We got stops.”

McDonald then buried a 3 and a junior center Teeng Akol delivered a powerful dunk to bring the momentum back on WKU’s side.

Freshman guard Derrick Gordon, who finished with nine points and 10 rebounds, blocked a Jeremy Allen 3-point attempt then came up with the rebound and was fouled. He knocked down two free throws to give WKU a four-point lead, 65-61, with eight seconds left.

Freshman guard T.J. Price sealed the game for the Toppers with two free throws of his own.

“You’re going to get a guy who’s won a lot of basketball games in his career. He knows what winning is all about. And he’ll do whatever it takes — whether it be scoring the basketball, getting defensive stops, whether it be diving on the floor to get a loose ball — I just call him ‘Old Reliable.'”

Fant came back into the game minutes after his ankle injury, and Harper said Fant will be fine moving forward.

And as the old adage says, the Toppers survived and advanced and will play No. 2 seed Arkansas-Little Rock at 8:30 p.m. on Sunday at Summit Arena.

“It wasn’t our best game, but we played together,” Price said. “We played defense when it was time to play defense and time to get tough stops. But the main thing was we played together and pulled out the win.”