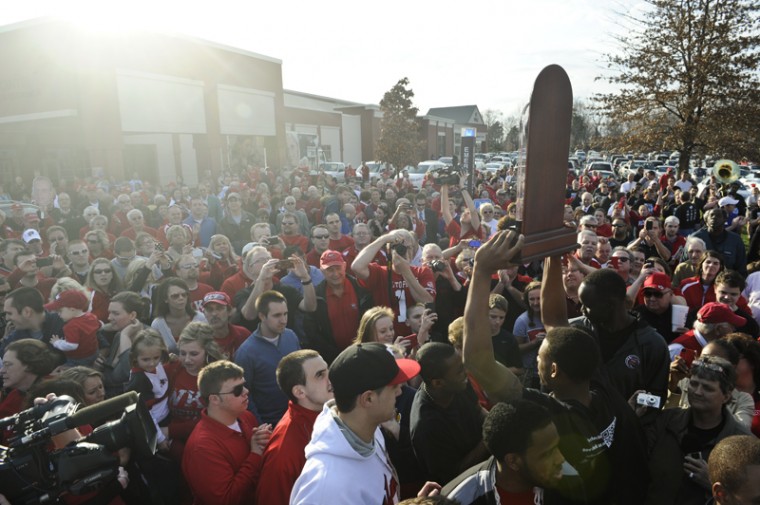 Sun Belt Conference Tournament Most Outstanding Player George Fant hoists the championship trophy over his head as the WKU men's basketball team was greeted by fans at South Campus on Wednesday.

Teeng Akol thought there might be 10 fans waiting at the Carroll Knicely Center on South Campus when the team arrived back from Hot Springs, Ark., after winning the Sun Belt Conference Tournament championship.

The junior center was in for a surprise when he got off the team bus.

Fans showed up in droves, packing the sidewalk and service driveway at the Knicely Center to welcome home a team that rallied from the cellar of the Sun Belt to earn its 22nd NCAA Tournament appearance.

Freshman forward George Fant, the tournament’s Most Outstanding Player, was the first one off the bus. Fans cheered as he held the tournament championship trophy over his head and joined in with the crowd in singing “Stand Up and Cheer.”

“It’s a dream come true for me,” Fant said of how the regular season ended. “All these years, going through all this adversity and everything — the coaching change and a lot of people…not saying they don’t believe in us but they just thought we were so young and we couldn’t get the things done.

Head Coach Ray Harper then grabbed a bullhorn and stood on a small ladder to thank the hundreds of fans in attendance.

Harper gave them the same message he had given the media the week prior and after his team won the championship — that he had no doubt his team could win it.

He then shifted the focus to WKU’s upcoming season — the postseason.

Harper invited fans to show up at Diddle Arena at 4 p.m. on Sunday for an NCAA Selection Show watch party where the Toppers will find out who they’ll play, when they’ll play and where they’ll play.

Several projections have the 15-18 Toppers playing in one of the “First Four” games in Dayton, Ohio as a 16 seed for the right to play a No. 1 seed. Others have WKU as a 15 seed.

Either way, it doesn’t matter to Harper.

Players walked around shaking hands, mingling and taking pictures with fans who couldn’t seem to wipe the smiles off their faces.

Two diehard fans from Bowling Green, Jon Whitaker and Braden Wilson, made the drive to Hot Springs for the championship game on Tuesday. They followed the team back to Bowling Green to welcome them and congratulate them on their victory.

Whitaker described this season as a “rollercoaster” and said he never thought he’d be attending an event like Wednesday’s rally after how the season started.

“It’s kind of surreal how these guys have matured and came together this late in the season,” he said. “Like Harper said, it’s not over yet. We’ve still got next week. I have no doubt that we’ll win the first game and hopefully go on from there.”

Wilson said too that the season has been a “ride” of sorts and he’s mostly happy to see the team enjoying themselves on the court, something he didn’t think was happening before Harper took over on Jan. 6 after Ken McDonald was fired.

“The culmination (Tuesday) night, just seeing those guys on the floor soaking it all in, the joy…I think that’s what we as fans — we’ve been on that ride with them the whole way,” he said. “From the beginning of the season when it looked like they didn’t have things together, they weren’t having as much fun as they could have been…to see that transform from early January to (Tuesday) — wow.

“‘Unbelievable’ I think is the word I used most (Tuesday) night after the game.”

The players also spoke about the season in similar words.

“It’s been a long, long season,” freshman forward Vinny Zollo said. “It’s had its ups and downs. It’s been a rollercoaster. But we’re peaking at the right time. There’s so much emotion that’s gone into it, but I think it’s really brought us together as a team and made us a stronger group of guys.”

Gordon too called the season “up-and-down,” highlighted by a mid-season coaching change.

“At the beginning of the season it was all downhill — Coach Mac getting fired, we having a losing record and things like that,” he said. “But once Coach Harper got the job…his practices were a lot different than Coach Mac’s. I mean, that was really the turning difference, I’d say. Him pushing us so hard, making us win all these games, I mean that’s what we need.

“Mac, I mean he’s a good coach and all, but Harper really took it up a notch. That’s what made us the great players that we are.”

He also said they validated his and Athletics Director Ross Bjork’s decision to fire McDonald in January and named Harper the permanent head coach in February — decisions that were met with criticism from several members of the national media.

“This was our plan,” he said. “You don’t always know that a plan’s going to work out like you want it to, but this one has, and they’re not through yet. I do not discount what could be possible going forward next week with us. But more importantly than that, what lies ahead for the next few years is just really energizing.