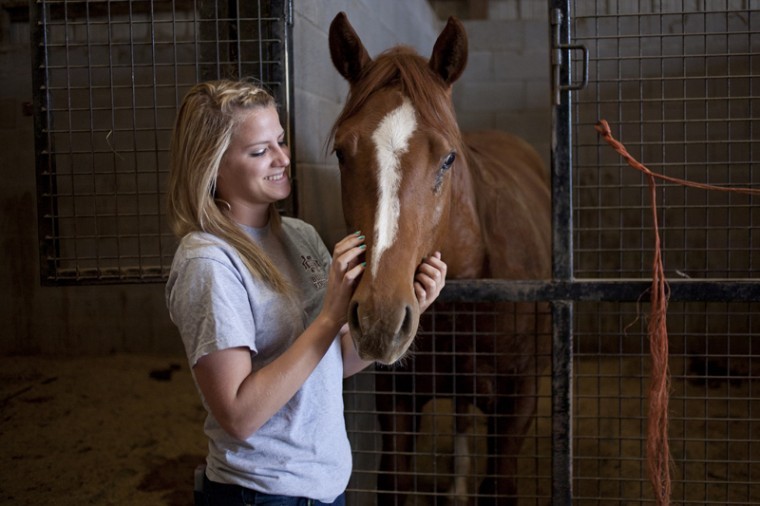 WKU Equestrian Team member Calan Clifton, a freshman from Springhill, Tenn., greets a horse before the team’s practice at the University Farm Tuesday.

The sound of stable floors being swept and the hiss of a water hose could be heard in the horse barn on the WKU Farm on Tuesday afternoon.

These noises were the background music to the occasional horse whinny and the chatter of college-aged women.

The WKU Equestrian Team was busy. They were tending to the horses, cleaning the barn and completing other tasks around the stable.

Conner is the president of the team and works part-time at the stable.

Her presidential duties include keeping the team up to date with practice times, handling money and coordinating the awards banquet.

For her part-time work, she feeds the 40 horses on the premises, cleans their stalls and turns them out to pasture.

Conner said that she spends between 20 to 25 hours a week at the farm, including weekends.

The Equestrian Team is coached by Dr. Charles Anderson, an animal science professor.

Erica Dumeyer, an alumna of the WKU Equestrian Team visiting during her spring break, said the team is unique because it has a lot of responsibility with the horses along with its competition schedule.

Before the shows, members of the team enter into categories based on their skill level. They are assigned to horses at random, and then the member is graded on how well they perform.

Any rider who receives a total of 36 points during the preliminary shows is able to go on to the IHSA regional competition.

Five riders from WKU were eligible to compete at regionals, and two are proceeding to the national competition.

Conner said her small team of 15 riders does well against bigger groups like Murray State.

While holding their own in horse shows, the team is also in charge of training the horses owned by WKU.

They also spend portions of practices in the barn performing routine maintenance on the animals and their surroundings.

Dumeyer, who graduated from WKU in 2010 and now attends Auburn University’s veterinarian school, said these skills prepared her for her future.

“The horse experience I got here under Dr. Anderson and with the girls really bumped up my resume,” she said.

Being a part of the team is not only teaching riders about horsemanship — it also offers them a chance to relax and focus on something else away from school.

Calan Clifton, an 18-year-old freshman from Spring Hill, Tenn., said she’s been riding since she was little when her family lived in Mississippi.

“My mom suckered my dad into getting a horse,” she said. “And she threw us up there and said, ‘Ride!’”

After her family relocated to Tennessee, Clifton said she didn’t get to ride. As an incoming freshman, she spoke with her adviser about equestrian opportunities and quickly contacted Conner about joining the team.