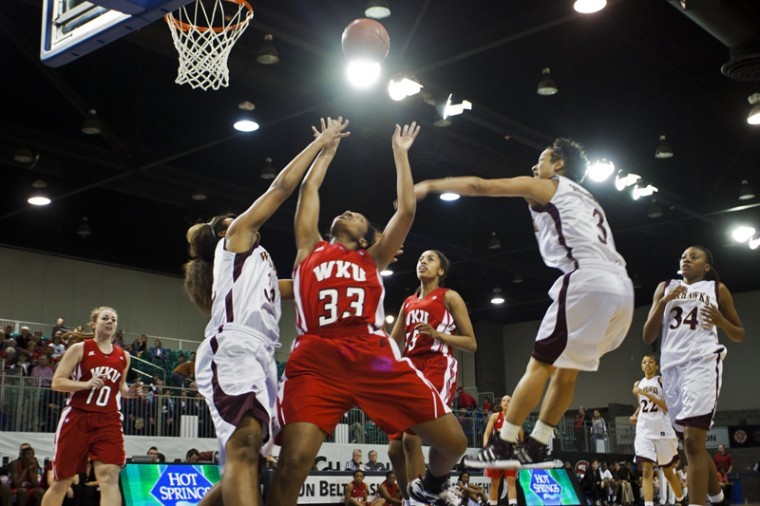 Senior guard Vanessa Obafemi fights for the ball during the first round of the Sun Belt Conference Tournament. WKU beat Louisiana-Monroe 66-50.

HOT SPRINGS, Ark. — WKU players and coaches went into this weekend’s Sun Belt Conference Tournament saying they were going to turn the page on an 8-20 regular season and treat the tournament as a new season.

After a 66-50 first round win over West Division No. 4 seed Louisiana-Monroe on Saturday at Convention Center Court, the Lady Toppers are 1-0 in their new season.

WKU, the East Division’s No. 5 seed, led comfortably throughout, never letting the Warhawks draw within eight points in the game’s final 30 minutes.

Head Coach Mary Taylor Cowles said her team’s focus was key in putting ULM away and avoiding a repeat of the team’s first meeting in which the Warhawks overcame a 45-30 second-half deficit to beat the Lady Toppers 53-49 on Dec. 29.

“At this time of year it’s about survive and advance, and that’s what these young ladies did,” Cowles said. “I’m really proud of them for that.

“They remembered, even though it was more than two months ago, they remembered our game at Monroe during the regular season and the fact that we just simply didn’t finish a 40 minute game. Today I thought they were very focused and very in tune to the fact we’ve got to put 40 minutes on the floor.”

Filling much of the void in the post was freshman forward Chastity Gooch.

The former Franklin-Simpson High School standout finished with 10 points and nine rebounds, seven of each coming in the fist half.

“Big play by Chastity Gooch has been really, really good for us, especially late in the season,” Cowles said. “Our team, our staff is very confident in putting Chastity out on the floor with her ability and just how confident she’s been playing. She didn’t let us down.”

But the Lady Toppers did some of their best work on the defensive end.

WKU held the Warhawks to 26.9 percent field goal shooting, the third time this year a Lady Topper opponent has seen their shooting percentage fall in the 20s.

Much of that success came from containing ULM’s point guard Elizabeth Torres.

Torres, whose driving abilities were complimented by Cowles earlier in the week, had three assists on Saturday, two below her team-high average of 5.0.

She spent much of the game on the perimeter, unable to get baskets close to the rim.

WKU’s first double-digit lead on Saturday came after back-to-back 3-pointers from sophomore guard Chaney Means and freshman guard Danay Fothergill made the score 20-8 with 8:54 left in the first half.

Gooch and Govan scored all seven points during that stretch.

ULM was able to trim its deficit to 29-21 at the half, but that would be the closest the Warhawks would get the rest of the way.

Keyed by five points from Govan and four from senior center Jasmine Johnson, WKU used a 14-1 run at the beginning of the second half to make its lead 43-22.

The Lady Toppers’ lead was never less than 13 points the rest of the way.

The final margin likely would’ve been more if WKU didn’t commit 26 turnovers. They Lady Toppers also hit just 3-of-10 free throws in the first half, though they rebounded in the second half to finish the game 18-of-31 from the line.

Owens finished with 11 points and five rebounds for WKU.

Center Larrie Williams was the lone double-digit scorer for ULM, finishing with 16 points.

WKU will get its third crack of the season at rival Middle Tennessee State at 12 p.m. on Sunday in Summit Arena.

The Lady Raiders, the East Division’s No. 1 seed, finished the regular season 16-0 in Sun Belt play.

MTSU capped off its perfect conference season with a 77-62 win on Feb. 26.

Govan said sending “the seniors out with a bang” was a big motivation for her and the team on Saturday.

She said beating the league’s regular season champion on Sunday would do just that.

“Every game against Middle is a big game because of the rivalry,” Govan said. “…We just have to come out with the same mentality we did today and handle business.”