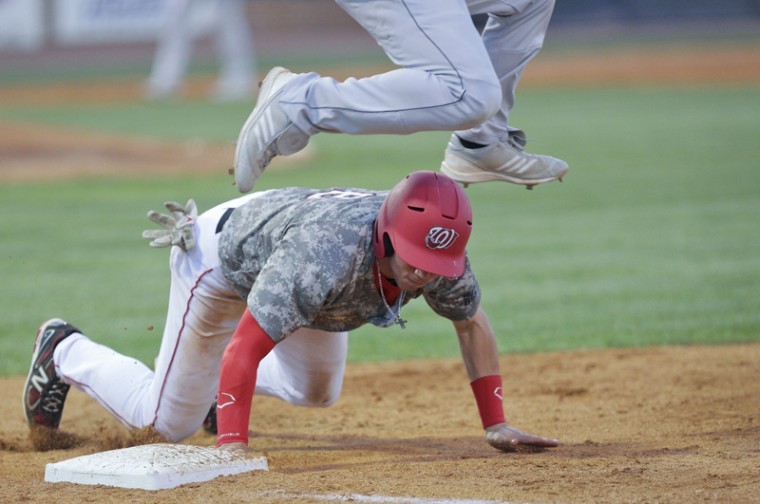 Junior Steve Hodgins slides back to first under a leaping FIU first baseman at Nick Denes Field Friday night. WKU lost to FIU Friday and Saturday before winning the final game of the series.

WKU has yet to play a ranked opponent or a team with a rating percentage index in the top 40 this season. The Wildcats boast the fifth-best RPI in the nation coming in to the meeting.

Head Coach Matt Myers said the Wildcats’ record “puts a bigger bull’s-eye on their back than they already had.”

Despite the challenge his team faces going up against a quality opponent like Kentucky, Myers said they will not go in to the matchup intimidated.

“The thing about our kids is we’re not afraid to play anyone,” Myers said. “We’re not going to walk in there and be wowed.”

One reason Myers said his team will be confident is due to the recent success they’ve found against the Wildcats.

The Toppers have won the last four meetings against UK with their last loss coming at home on April 23, 2008.

The last time WKU lost in Lexington was on April 2, 2008. The Toppers have won two meetings at Cliff Hagan Stadium since that defeat.

Myers said this game is still an important game even though it’s in the thick of the Sun Belt Conference schedule.

“It’s always a special game for our kids when we play UK or Louisville,” Myers said. “The battles have been great.

“From an in-state standpoint and recruiting — yeah, it’s a big game. But we’ve won four straight over them, so we’ve got confidence.”

The Toppers and Wildcats have faced two common opponents this year in Murray State and Tennessee.

UK comes out of the weekend having won two out of three against Tennessee while the Toppers lost in Knoxville, Tenn., by a score 8-7 in 13 innings on February 21.

Despite the lopsided records at this point in the season, freshman left-hander Ian Tompkins said he likes WKU’s chances on Tuesday.

“I think we’re going to get after them just like we have any other team this year,” Tompkins said. “We have as good a chance as the next team.”

The Toppers will be looking to continue their momentum after salvaging the series finale in their weekend series against Florida International.

WKU dropped the first two games of the series by a combined three runs but pulled out a 9-4 victory in game three.

Myers said the win was key heading into Tuesday’s matchup with UK.

“You lose this game it could be trouble going in to Tuesday,” Myers said. “But you win this game the way we did, our guys are going to be ready to go come Tuesday.”